We had 12 guys out at the club last night. Dave and Scott faced off in the first game of their WAB campaign. Here we see Scott's Normans. 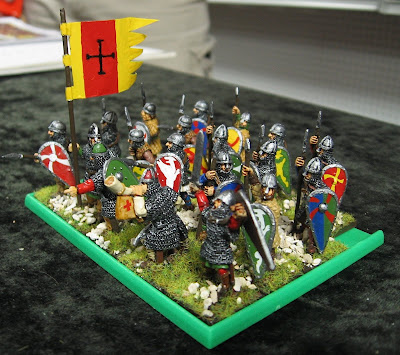 And these are Dave's troops (Saxons? Picts?). I'm not sure who won but the game was over in an hour or so. 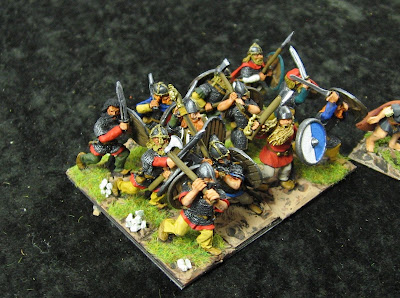 After several months of preliminaries, I finally brought the big LotR game to the table at the club last night. Eight guys played (Mark, Chen, Kevin, Andy, Craig, Chris, Bruce and Terry) and Justin observed. This was a fairly complicated game with various special events (including variable reinforcements, magic, hidden troops and differential knowledge of the terrain). Here we see Kevin explaining to Mark the special rules that differentiate rivers from roads... :). 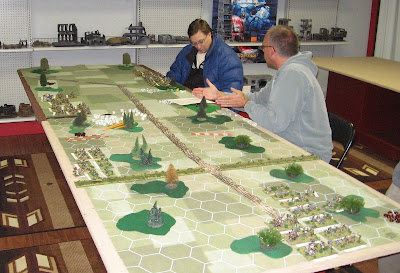 The game got off to a fairly slow start on the western side of the board. 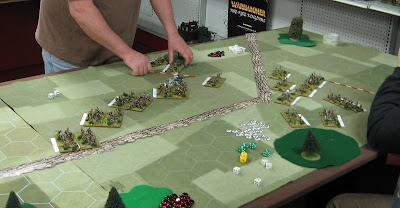 The Orcs maneuvered to bring their weight against the forces of Gondor. 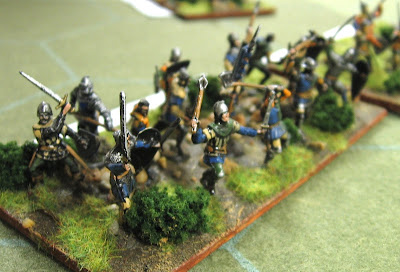 Both sides fiddled about some, with the Orcs awaiting the arrival of some trolls and the Gondorians holding some forces off board using eleven cloaks. About this point, Gandalf forced the Wraith King off the board in a duel, which had an important impact later in the game as evil could never get a double impulse. 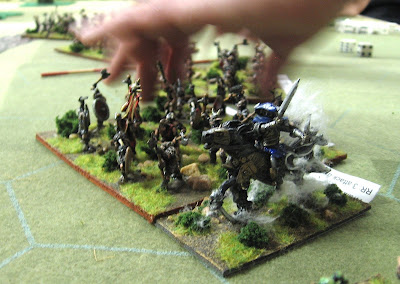 The trolls finally arrive but get bogged down by some Gondor militia. 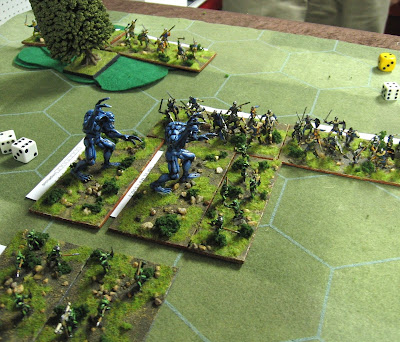 Over on the east side of the board, the Rohan rushed across the "impassable" stream (much to the disgust of the evil players) but then got bogged down in some shooting and melee. Just as they broke through, the warg riders arrived behind them. The elves also showed up at the rear of the evil forces at about this time. Here is everyone gathered around the table mid-game proffering different rules interpretations. 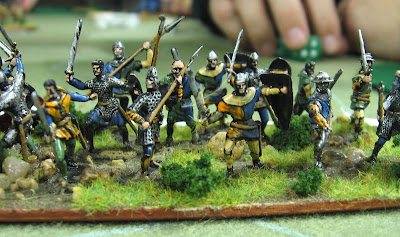 Oh no, wait, that is this picture. 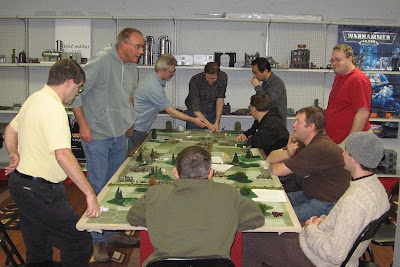 And here we have the (late) arrival of the dwarves, which helps turn the tide firmly in favour of good. 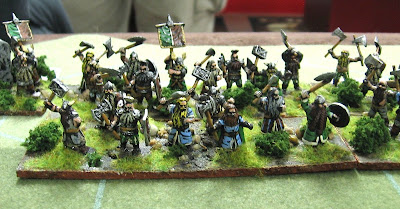 In the end, it was a narrow victory for good. I think the game balance required evil to win quickly before the reinforcements for good showed up. The patience of everyone was much appreciated as reffing eight guys (half new to the system) lead to a few inconsistencies!

8 players!! Looks like a great game. Those Caesar trolls are huge!

Yes, big trolls causing much drama when they arrive! Eight players was a bit crazy and I might have been too ambitous. Oh well!