I finally focused on and finished a Corvus Belli Ancient British DBA army (II/53) for my buddy Chris (now his Romans have someone to fight!). The army comprises 4 stands of chariots, including an optional chariot general. These were a bitch to assemble, with lots of awkward flash in the horse's legs and fiddly gluing of figures. But the result is pretty good.

I did a Boudiccia general figure. The plaid turned out pretty dodgy--too much rippling in the cape to get nice lines. 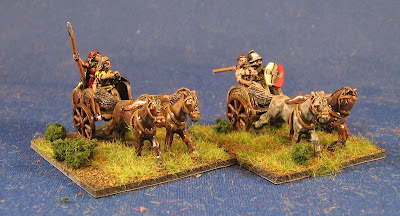 The dip is doing a very nice job of the horse flesh. 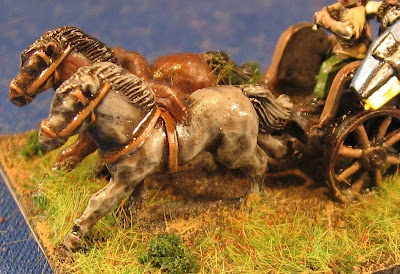 There are 2 light horse units. 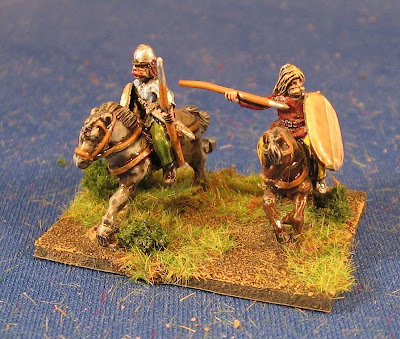 There are nine (!) warband units, including a warband general. Here is the general. 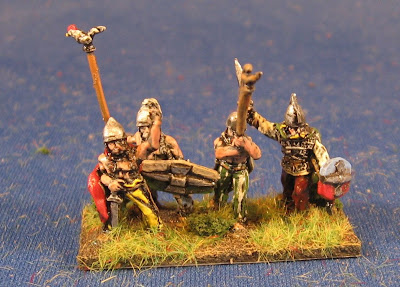 These were pretty nice figures but a fair bit of flash to carve off the bottom of the bases. But the detail is very nice. 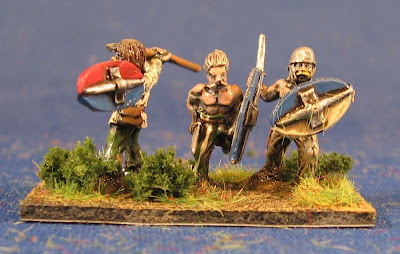 And then the paradox of individual shields: lots of possible variety but lots of gluing. 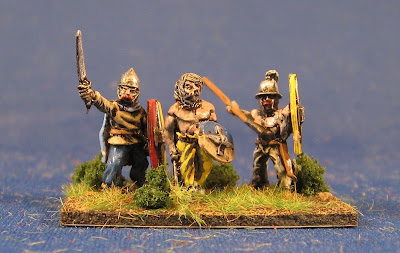 You get a better sense of detail looking from the side. 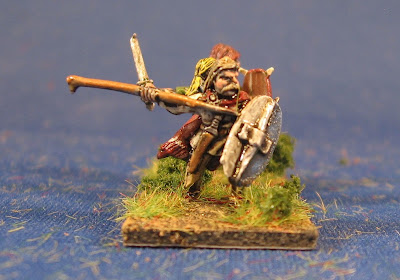 There are also four psiloi bases. Corvus Belli has modeled teenagers as the psiloi. Not sure how I feel about that. Yes, it is likely accurate. Yet do we really need to accurately model child soldiers? 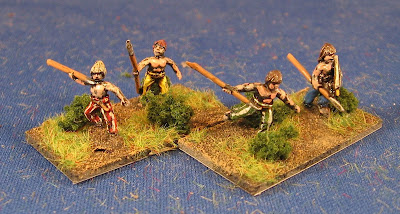 Then there are these two bases of regular slingers. 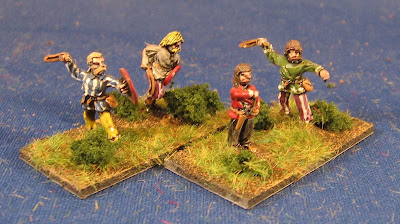 Anyhow, overall a nice army with a fair bit of punch against the legion (at least on the first contact!), with some speed and rough-going options. And more complex to play than the Marian Legion Chris already has!

Up next: A 15mm Marian legion is on the paint table right now which will be up for sale shortly. Thereafter, I don't know. I may try a few of the 28mm plastics I have picked up. Or maybe another 15mm army for sale. We'll see!
at 10:16 AM

Lookin' good, Bob! CVT should wet himself with glee!

I've not been a big fan of "The Dip" - I've seen others who've done it and it makes decent figures look like garbage - but you seem to pull it off again and again! Bravo, sir!

Very nice. I won a set of these figures a month or so ago and I'm really looking forward to painting it. I know what you mean about flash. I've got a few cavalry figures to allow it to be Gallic, and it can provide some warbands for Carthaginians, so I've got a fair bit of CB waiting to do.

Thanks. Yes, the flash on the bottom of the figures reminded me of old minifigs (where you could cut away 15% of the weight of the figure to get them to sit flat).

I love the dip--makes some careful block painting really pop. But it sure rewards careful painting and won't hide blobby blocking very well.

I have to say that I have come to hate detached shields. I see why they are produced this way but I frigging hate gluing those things one (even with gel crazy glue). I want to paint! NOW!

Consider me wet with Glee! Thanks Bob! They look amazing. It seems such a pity that they will end up as a conquered army...at least after they win once:-).

I've got those shields all ahead of me. Do you paint them first? I was wondering if that wouldn't be quicker; shields often get in the way of getting at parts of a figure.

I glue everything, prime and paint. The only time I would not do this is if the shields had rub-on transfers (which may be the case with some 28mm plastics I'm thinking about starting over the holidays. That said, fishing a brush in can be a hassle. Moreso with the chariots which I assembled first and then painted.