I popped by Bruce's last night for a game and he brought out to solitaire games he recently purchased from http://victorypointgames.com . The first is Empires in America. 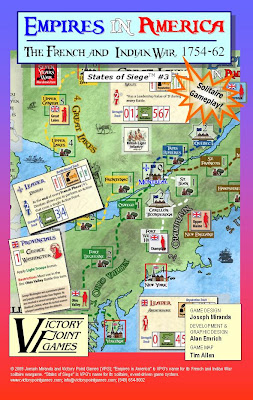 This was a fascinating little game replicating the FIW. You play the French and must fight against the game engine to outlast the deck of event cards.

The game is played in rounds, where you draw up cards from the event deck (which can have good or bad outcomes), then the British armies (if commanded by a general) move forward against Montreal on various tracks. Then you get to spend your action points playing cards, attacking the enemy, rebuilding your forces or building forts and trading posts. As the game progresses, the British forces become more and more overwhelming.

Overall, a tense little game with high playability because the sequence of events (war in Europe, arrival of British and French generals, fleet arrivals, militia call ups) are all randomly determined. A very fun way to game the war solo in about 45 minutes.

Bruce also brought out Zulus on the Ramparts. 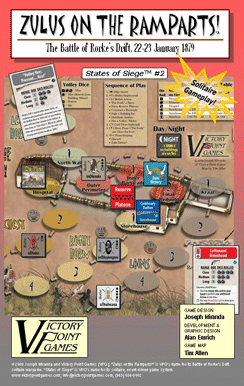 This uses a similar mechanism for solo play but adjusted downwards to address the different scope of the game. He says it is very much in the tradition of the movie everyone but I have seen and even includes some dialogue from the movie in the hero cards.

Up next: 15mm Romans are on the paint table. And a bunch of other 15mm armies just arrived. So looks like I will have plentry to do!
at 7:18 AM