I dropped over to Dave's house after work today for a bit of DBA action (my 50th day with gaming this year). We played two games. The second game was quite quick--his Hittites beat the hell out of my New Kingdom Egyptians. I'd like a rematch at some point now that I have a better sense of how they work. We also compared Hittite armies. Our painting styles have diverged: same figures, Dave's on the left and very bright; mine on the right and very dark.

The first DBA game we played put his Sassanids against my Roman-Brits. Lots of cavalry against lots of spears with an elephant and King Arthur thrown in for good measure. Kind of a proto-crusade match-up that I would try again.

The board was pretty crowded at the beginning of the game. 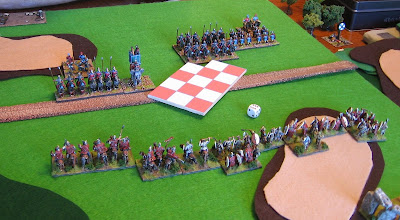 The line advanced. Here is the left side of the board. 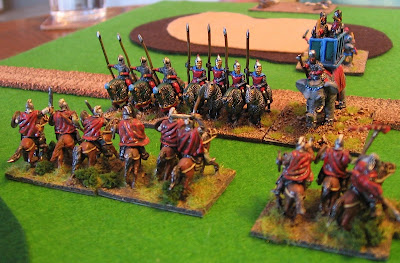 And here is the right. 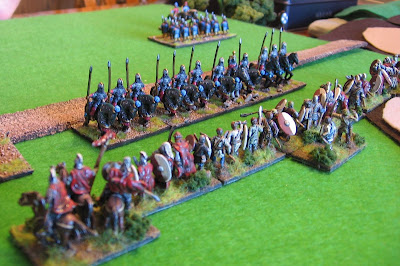 Combat proved fairly inconclusive. What developed was a long-term mess like this. I kept pushing him back but could never quite seal the deal and kill him. 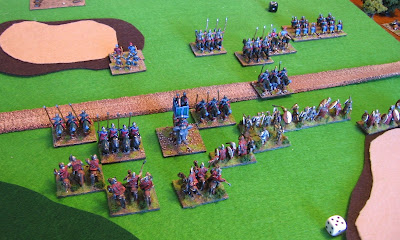 Eventually, Dave started to get an advantage on the left side of the picture. I pushed hard in the middle, knocking back his cavalry with the plan being to turn my spear and close the door on his elephant. Unfortunately, I lost my general on a 6-1 fight against his elephant (arse!) and that brought the game to a close.