Dave dropped by today for combination playdate and DBA-fest. He brought his Persians and I I hauled out my Normans and we had three games (2:1 for the Normans). The first game I set up the terrain (open field--no brainer there) and Dave had a tough slog against my knights.

You can see below that I have shoved through his line on the right and am about to do the same on the left. He tried to envelope my general in the middle but some cheesey bow-fire to the flank won this one for me. Game one to the good guys. 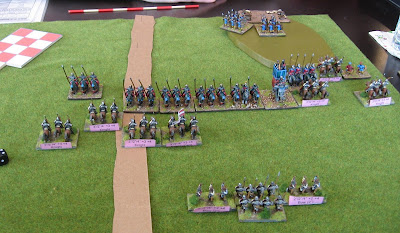 In game two I again controlled the terrain and put down a river. As it turned out, it ran perpendicular to the game play and neither of us tried to cross it. I think this game was decided on a general-kill (although I could be wrong) in favour of the Normans. 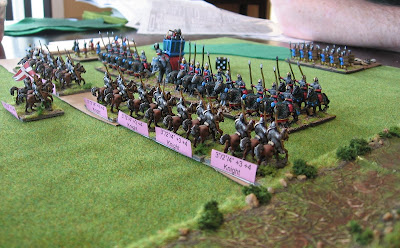 In game three, Dave set up a total hash of a board and then got caught splitting his force. Bad pips allowed me to bottle up the cavalry on the right but I could not handle his damned elephant. 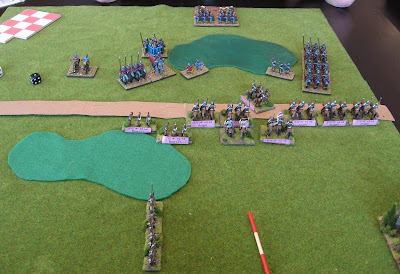 I'm pretty sure his general died in this game, but he had enough of an edge that he fought on and quick-killed a bunch of knights with his elephant. In fact, I think everything I lost in this game I lost to the damned elephant. 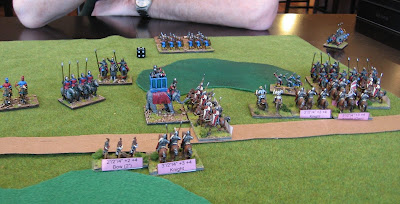 All told a good day and nice to see Dave pull game three out of the fire. It was truly awful right from the terrain set-up!

Up next: I have some 15mm Anglo-Irish on the painting table and also have been fooling around with 28mm plastic celts. We'll see which interest me most tomorrow!
at 5:50 PM

Lookit all them horsies!

I'm not familiar with Sassanids - was that all knight on knight? Or are the Sassanid mounted classed as Cavalry. They sure LOOK like Knights - and that's one match-up I haven't tried...

Mostly cavalry (just one knight) against my knights. They move a bit faster bit not enough to make a huge difference.