I finished up the rebasing of a bunch of late-war WW2 Germans that I picked up from Tim in Saskatoon. There were about 48 of these singles to flesh out the Memoir units I based last week.

This is a mix of plastics and metals and there is a lot of pose diversity here.

Not sure what the third guy below is doing ("The sauerkraut has gone off!").

I also see there are some support units that I will need to rebase. Oy!

There are some old favourites including the Esci Panzergrenadiers complete with the guy (below, left) that has the potato masher stuck in his boot (which must be uncomfortable).

I also built and painted an old Esci Italian tank I got from Terry. The running gear was a bit fiddle (back sprocket held in place by a plastic tube the diameter of a sewing pin) but I managed to make it all work. Nice decal set. 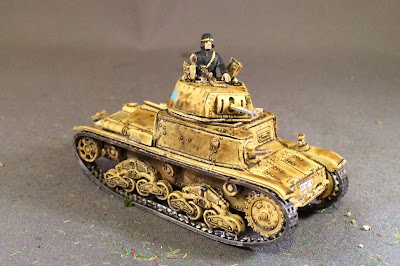 Up next: I have some CCN scheduled with Bruce tonight and then I'm working on a bunch of 20mm metal Russian cavalry I got from Tim. These guys might also serve as early war Polish cavalry. THen a bunch of Italians for the ETO and Russia.
at 5:00 AM

Thanks; TIm is an amazing painter so rebasing his stuff is a treat.