With work having come to a stand-still, I decided I would make another blog post pre-Christmas. I finally finished a bunch of ESCI Italians for the ETO.

There are 100 of these guys. Some are based as a group. The figures were kind of meh (older poses) and the Italian ETO uniform was boring. So I spend some time shading. You can see it most clearly on the pants and putties of the rifleman below. 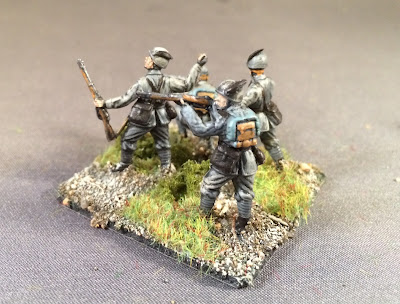 The majority of the troops I based singly as casualty removal markers for Memoir 44. Are there any scenarios with Italian troops--either in Italy or Russia? Might be a good game for January at the club.

I also built and painted four Russian tanks. I picked up a pair of heavy KV tanks from Pegasus. These were quick build kits. Kind of fiddly suspension systems (just lots to line up) but they cam with 4 turrets (allowing them to built as KV 1s or 2). I built both turrets for both tanks.

The KV-1 option included additional armour plating for later war (left below) which I added to one KV-1 turret and not the other. What they really need are some decals and, to my surprise, I have none. Perhaps a fellow gamer has some red stars or patriotic slogans in 15mm or 20mm they want to bring to the club on January 5? 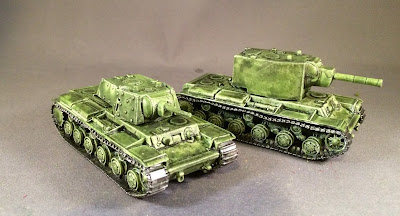 I also bought a pair of armour fast T-34s. Terrible, terrible instructions (even given that they were quick builds). Nice enough tanks. There is more surface detailing that you see in the picture.  They came out a bit more minty green than intended so I will dirty them up I think.

Up next: A bunch of Russian foot troops. Then I'm not sure. I keep thinking I should paint my Battlelore figures.
at 11:09 AM

There are about six Italian/Russian scenarios on the Memoir 44 site. Pick Eastern Front and then search for Italian. http://www.daysofwonder.com/memoir44/en/content/scenariofans/