We had a pretty good turn out (13 guys?) at the club on Tuesday. Dave hosted three other guys on a WW2 game (Chain of Command?) but none of my pictures turned out worth beans. And Stephen hosted Dave and Chen in some sort of walker game (Battletech? Robotech?). 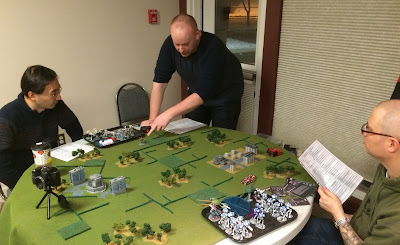 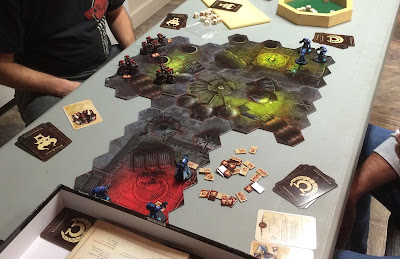 Bruce hosted (and took on) Phil and I using Maurice in India. 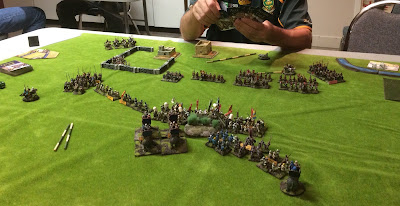 The Indian game plan was to swing some irregulars around to the left (you can see the cavalry doing so in the background of the shot above) while advancing in the middle. 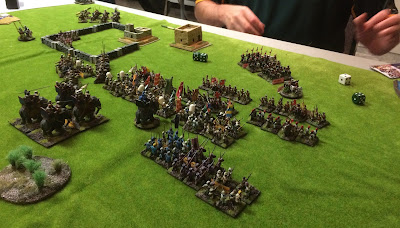 We got a bit over eager in the centre after Phil bagged two cannons and I moved to contact before we finished bringing the raiders around. Bruce happily pounded the hell out of the spearmen! And we ended up with a broken-up battle. Indian morale crumbled and that was that! 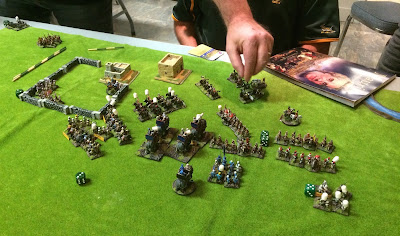 The Maurice in India looks fantastic! Are there any rules mods for it please? And whether there are or not, could you please post some army lists; I'd love to see how something out of Europe is covered under the game.

I think we played the rules straight up. Only mod for three players were two card decks were intermingled. Side with two players had two hands, each starting with five cards and maxing out at 7 while the side with one hand started with 7 cards and maxed out at 10. No real army lists--Bruce just picked out units (based on his experience with the system) and adjusted for the Indians. More irregulars, more conscripts, fewer missile troops.

So how were the spearmen and elephants handled within the existing rules?