I popped out to Bruce's on Tuesday night for a bit of French v Russian Napoleonics action. This battle was a Russian holding action that preceded the largest cavalry battle of the wars.

The first game saw Bruce open with a cavalry charge against the Russian right that I never managed to recover from. Oh, I delayed defeat, but it was a decisive thrashing (7-1?). There just wasn't much to do: couldn't fall back, couldn't move up, couldn't roll worth beans. 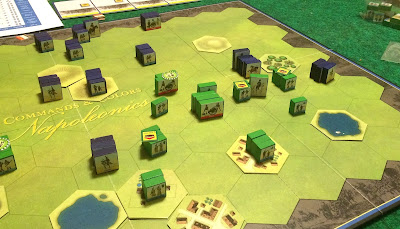 We switched sides and I advanced on the French right. I managed to knock Bruce off the hill and finally get my traffic jam in the centre under control. Some lucky dice with a cavalry charge really helped. 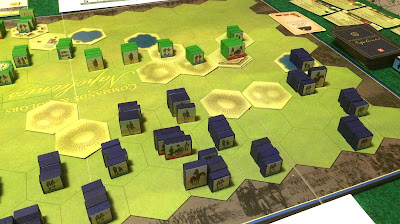 Then there was the pause as I ran out of useful cards. We both rushed reinforcements forward and Bruce set up a solid defensive line while I was forced to fart around on the left flank to burn some cards. 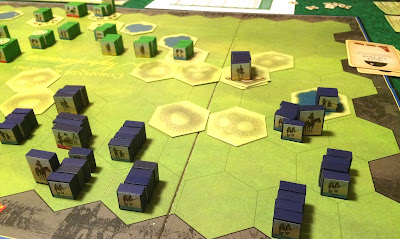 Eventually I won (7-6?) a narrow victory. A much better game, although some of that was down to Bruce's luck turning on him.

Up next: Some metal 1/72-scale Italians and Russian cavalry are drying and I'm working on a second wave of Italians in plastic. Then some CCA epic at the club on Tuesday.
at 6:06 AM