Continuing with the Soviet theme, today I have a bunch of naval infantry. Again, these guys were painted by Tim in Saskatoon and I just rebased them for Memoir.

There are some interesting poses. Below there is a guy with a rifle grenade (right) and a Molotov cocktail (back right). 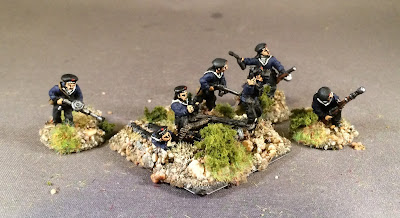 Not sure what this giant gun (below) is (anti-tank rifle?) but I feel for the guy who is the human bipod. 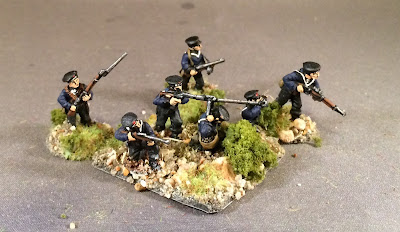 I also based three cavalry that Tim painted. He black lines by hand (rather than relying on washes) and the effect is striking.

Up next: Tomorrow I will have the last of the Soviet foot finished. Then I'm onto some cleaning, a year-end wrap-up and then some plans for 2016 (including painting out my pile).
at 8:17 AM

Bob, yes the "giant gun" is a 14.5mm anti-tank rifle. Do you know who makes the cavalry figures? Stephen

Stephen, No idea on the cavalry. Figures are metal but the horses are plastic. Maybe a mix-and-match deal on ebay? Bob