I braved the snow and ice yesterday to swing out to Scott's place for a little CCN. We played the Waterloo scenario twice, with the French winning both times! 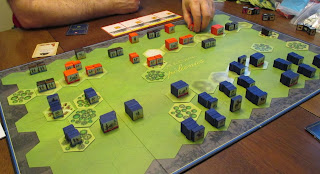 Here in game 1 you can see the French cavalry ran up the right flank (as well as up the left-middle), cleaned out a bunch of units and then got in behind the British lines. This pretty much tipped the game for the French/

The second game saw the french advance on the left (right in the picture below) and clean out a bunch of British units. And then the grind the middle began. Again, a bunch of cavalry charges were the key to the French victory. 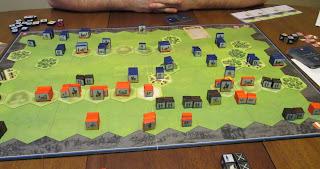 I have no idea how to win this for the British so a couple of more runs through the game are likely in order. Obviously shooting the key, but getting in position to shoot is tricky. 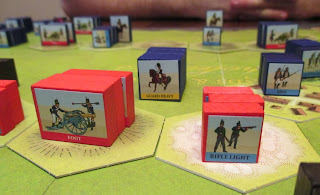 Up next: I'm putting the finishing touches on a bunch of 15mm Germans and Russians and (before winter returned) I primered a bunch of 1/72 cops and robbers.

Apparently this is not such an uncommon outcome; the time of the battle (which I didn't notice) was for the period of time when the French were doing well. So I don't feel so badly now!