With work demands lightening up, I finished off about 100 15mm WW2 Germans from Battlefront. these are part of a commission that will occupy much of my holiday painting time.

There are three companies like the one above, each with a command stand and six bases of foot. Each will also have a panzerschrek team attached--just finishing those now. And a couple of bases got drafted to fill out a pioneer company that will come before New Year's. The figures were generally nice. I find the "oblong base in a round hole" disconnect in Battlefront sets slightly off-putting as it adds to the basing demands.

One of the requests was that I do half the guys in plane tree and half the guys in oak leaf camo. While technically possible, that kind of detail is at (and perhaps beyond!) the limits of my skills in 15mm. So I picked two slightly different colour scheme and put the paint down in different sequences to get two distinct camo patterns. I also left a few guy with grey bits (odd-ball hats, helmets and trousers reflecting  company in the field).

When I finished painting there were two clear patterns that approximated the differences in camo style. Then I washed them to add in shadows and they all kind of looked the same at the end! Below you can see the starkest contrast I could fine between the darker and the lighter versions of the camo. Most guys fall in between the two extremes and it is hard to tell the patterns apart. 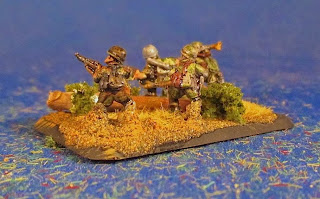 Up next: A battery of 8mm ATGs and then onto some more 15mm pioneers, light artillery and some Soviets who had a "change of heart" during the war.