I'm almost at the end of this 15mm WW2 German commission and today I have pushed some artillery out the door.

These are Battlefront models, with four guns in the unit. I've been experimenting with a bit more vertical in my basing (hence the tree trunk on the base below) to add some additional relief. 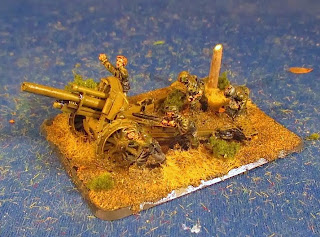 There are a couple of nice pieces with this set. Below there is a motorcycle with sidecar. Total pain in the butt to assemble but a nice enough piece. 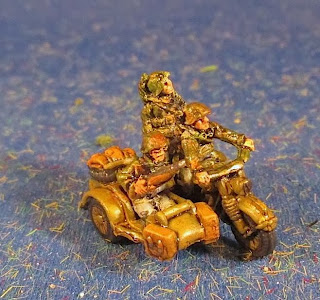 There is also a base of forward observers. 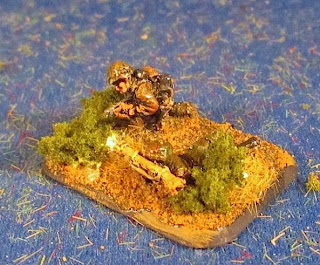 The nice piece, though, is the staff base below, where Opa has gathered his kin folk around the table to plot a barrage. There is a radio guy, a fellow taking steno and a vaguely disinterested rifleman. Plus a command base.

Up next: Tomorrow some 15mm pioneers and then some 15mm Russians for New Years Eve. After that, I'm working my through 1/72 scale cops and robbers.
at 5:00 AM