I've just finished up 50 1/72-scale imperial Romans to flesh out the orbits for the re-release of Expansions 2 and 3 of Commands and Colors Ancients in the new year.

These are Strelets' Extra-Heavy Roman Legionnaires and are different from their regular box because they additional armour. The 6 standing poses are pretty decent. I think I have missed a pose in the photo (guy standing with sword point forward at waist height) but you get the idea. The sculpts are chunky like metals and they paint up very easily.

There are also four action poses. These are pretty good, although the pose on the left (and below) is very awkward. It actually looks better in the picture than in real life. My only complaint about this set (like most of Strelet's sets) is that the weapons do not fit well in the ring hands (I ended up cutting the rings open and gluing). Some of that likely has to do with the tolerances of the Strelet's casts, but some is also a design issue (e.g., making the sword pommel 50% bigger than the opening it must ass through). 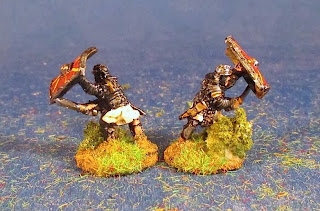 Up next: The final club night is next Tuesday. In the meantime, I will be working on some 15mm WW2 German foot. Trying to replicate (and differentiate) oak leaf and splinter camo in 15mm has been an interesting technical challenge, but I think I have a system that works. I also owe Chen a tutorial on replicating airbrush diffusion with a paint brush.
at 5:00 AM

Very nice paintjob. Strelets are great..not the most anotomically correct but they have tons of character.

Thans Paul; I agree. I'm always disappointed when I open the box, but then they get assembled and primed and they start to look much better. And a bit of paint and your off. They also have some big ranges so I don't have to mix-and-match too much within an army.