Bruce hosted me for a game of CCN last night, as a retreating Russian army turned on the French (don't recall the name of the battle). The challenge for the French is difficult deployment while the Russians have a lot of terrain objectives (denoted with blue cubes) to protect.

We played the game twice, with the Russians winning both times. A well timed cavalry charge with what seemed like hordes of Cossacks was key to the Russian victories. I'd certainly try to clean those bastards out early next time!

Both French advances failed as they ran out of steam and into a real meat grinder. I think the strategy should be an advance up one side (towards the river) followed by a cresting of the hill to put a bunch of casualties on the Russians to gain the 10 banners needed for victory. Of course, what actually happens is driven by the cards to a large degree! 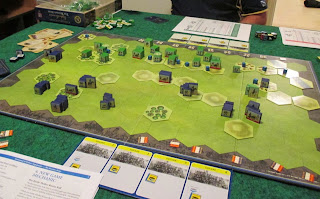 Up next: A 15mm V-1 objective for Flames of War is drying and then I am finishing the basing of 50 1/72-scale Strelet's heavy Roman legionnaires. Then maybe back to some 15mm WW2 to finish off a commission before Xmas.
at 7:32 AM