And so draws to a close, this 15mm WW2 commission. The last unit is a group of Soviet troops who switched sides (can't recall the technical term for the unit) and will now provide some security for the artillery and pioneers. 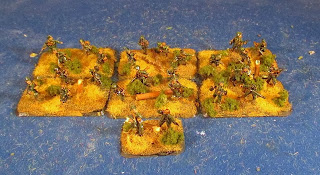 These are 15mm Battlefront figures and they are notable thinner in sculpt than the German (perhaps bad Soviet logistics triggered their change of heart?). 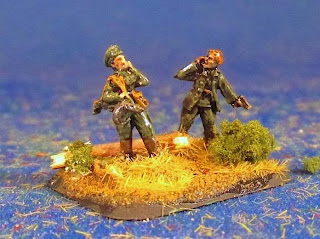 Some nice sculpts, though. I'm particularly taken with the left-hand fellow below which is changing out a drum magazine on his SMG. 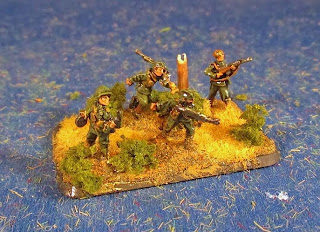 Up next: Speaking of drum mags, I am working my way through 52 1/72-scale gangsters, thugs and coppers from the '30s and several have Capone-style Thompsons. I hope to have these guys done early in the new year. My painting hope for next year is 100 figures a month--we'll see how quickly I can build up a lead on that target.
at 5:00 AM