Some 1/72-scale Greeks from HaT

Over the weekend, I painted up a box of 1/72-scale HaT Thebans. The box contains an "army" of 72 foot and 8 mounted, all in useful gaming poses. 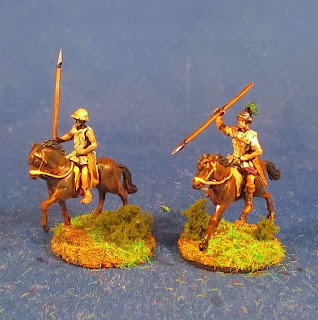 There were 8 mounted--one armoured and one unarmoured pose. Both provide light units to fill out several armies, although I expect they will mostly oppose my (as yet unpainted) Persian forces. 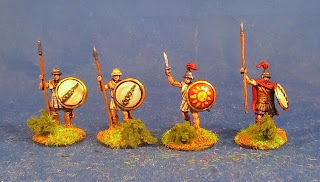 There were a fair number of armoured and unarmoured spearmen. Above you can see the Theban shield design embossed on most of the figures (and my efforts to add some diversity using the non-embossed shields). The command figure is a nice one and will serve as a general.

Below we have a selection of rather flat "side-shot" figures. I'm not crazy about the starker or diaper poses on the left but they'll do for light troops, I guess. I quite like the guy on the right despite the spear being cast attached to his head.

There were also two poses with ring hands for spears. I appreciate the effort to give us poses that are less two-dimensional. Setting aside the lousy photo, I'm never all that thrilled with these as the spears are delicate, the ring hands never fit properly, and they are a bit too perpendicular for my tastes. 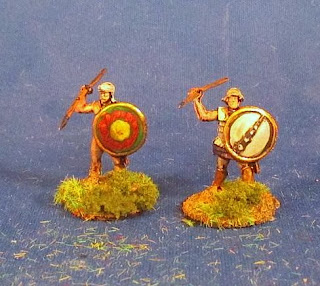 Anyhow, a decent start on a Greek army. Perhaps a bit out of period for some of the battles they will fight but cheap an plentiful has a quality all of its own.

I like this box, very useful variety of poses and equipment. Although these guys were aligned with the Persians for the most part, and fought well against the Athenians at Plataea. So they are perhaps more suitable as Persian allies than foes for the invasion period.

Greeks is Greeks, dude. As you know, I'm not picky and owed happily use them to fill out the ranks of an Alexandrian army in a pinch! Great box, though. Good selection of poses and no one is posed doing anything really stupid.