I find myself in the unusual position of having to paint up troops to fill out an orbit! The CCA game I'm planning on hosting Tuesday at the club requires two units of light bow for the British, troops for which I have made no provision! Huh.

Anyhow, a quick rummage through the box-o-spares turned up nine 1/72-scale guys who will do in pinch. Four of these are Dacians (from Dave, I think) and there look like three old Airfix. And then there two mystery figures (the bald ones--well, perhaps a skull cap that I converted to baldness with some thick paint--maybe medievals from the Robin Hood set?).

It was strange painting in a lot of nine, instead of 50. Quick! And more enjoyable! Here they are based up on magnetic movement trays (how did I get such detail on the trays, you ask...) ready to drive the Romans back into the Channel. 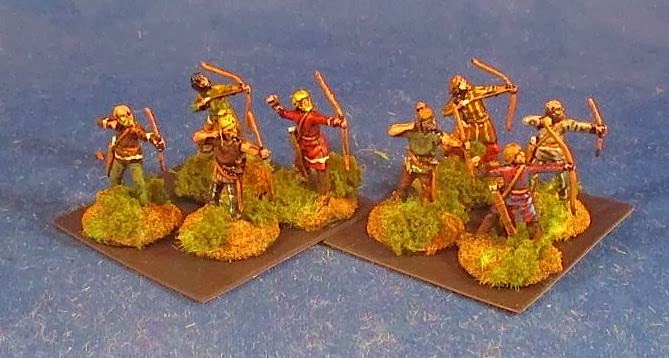 Up next: Club night is Tuesday and then I have a bunch of 15mm WW2 Germans base coated that need some love.
at 1:54 PM

Very nice job on these. I also like to use magnetic sheet for movement trays.

Thanks. Not a perfect solution but it is quick and dirty and lets me swap them around for different systems. Lots of guys at the club do much a much nicer job than I do!

Hi, i know that the thread is old, but how many layers of magnetic sheet did you used to keep the washers firmly magnetized?