Bruce hosted a game of CCN using the Austrian expansion last night. This was a vanguard-rearguard engagement with few (5 and 4 respectively) command cards and a nasty deployment. 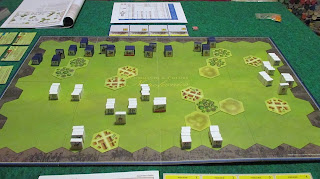 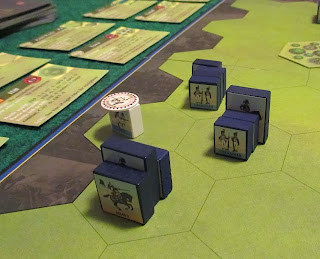 In both games, each player refused their left (or lost all of their units on the left...) which created serious command card woes with so few cards. The first game was a 5-4 Austrian victory because I got lucky and picked off a bold cavalry unit. In the second game, the French attack was much more coordinated and the Austrians took it on the chin, 5-3 (but it was far less close than the score suggests--complete French romp).

Overall, a fun night and an interesting discussion of a new book on Dieppe that posits Dieppe was actually a cover operation for a raid looking for the Germans new Ultra codes. Which explains a lot of the odd aspects of Dieppe.

Up next: I have some 15mm sturmtigers just about done and need to build some more 15mm German units for a commission. I also have some 1/72 cavalry underway.
at 6:21 AM

I'll have to go pick this up. There was a show on History Channel last year called Dieppe Uncovered that I think was about the same thing. Pretty good show.

The History Channel? Were aliens responsible for the Dieppe Raid? Bruce said the book was based on information declassified on 2012 or 2013 and there was some tie in to Ian Fleming of all people.

Yeah the show sounds exactly like you describe. It was one of the very few good shows on History Channel. no aliens, pawn brokers or hillbillies were involved.