Bruce dropped by last night and brought out A Few Acres of Snow. We've played before and the British have never won (which runs contrary to lots of chatter on BGG) so I gave them a whirl. 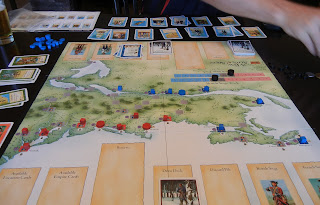 My thought was to build as fast as possible to bring the game to conclusion before the French could expand into the Great Lakes too much. I also wanted as few cards in my hand so bought only enough infantry to take Port Royal (and deter my very imperialist minded opponent!). 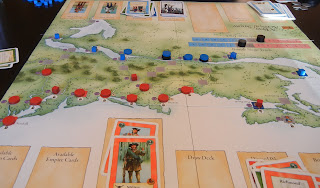 This strategy worked, to a point. His Indian raids made the game quite a lot closer than I thought it would be when we eventually counted points. Obviously some military work in Nova Scotia will be required. 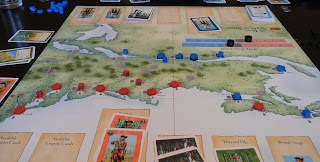 We then played again and I did some attacking in the east to grab Halifax and Port Royal. The cards meant it took longer for me to build to the right point and the french won on points. A very interested set of games. I wonder if some military adventurers might be necessary. I also wonder if the governor card might be moire useful than I thought.

Up next: I have some 28mm Romano-Brits being based. I am also building some more 15mm Polish cavalry and the rest of the Romano-Brit warband has been primed.
at 6:54 AM

I play against a regular opponent. We have split the victories between the British and the French. Seems to me the British can win through growth but the French have to use more "low cunning" to win. Great game.

Mark: This is a great game. I've thought about buying it but since I'd most likely play against Bruce (who already owns it) that seems wasteful!

Greg: Yeah, I'd agree wit that assessment. I wonder if the French player can counter (or at least seriously hinder) the British player by adopting a "trade and fight" strategy and go for a military victory, rather than fiddle around with expansion? A small hand might well give the French the advantage and force the Brit to change strategies in the middle of the game.