There were 11 guys out the club last night and three games ran. Scott and Chris played a GMT game about the dissolution of the USSR in eastern Europe in 1989. No idea about the name and they were still going at 9, when I left. 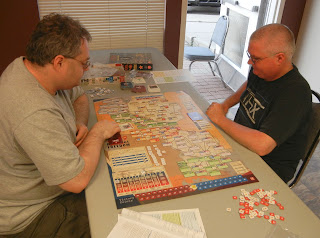 Will, Terry, Bruce and newcomer Dan played a game of Legends of the Old West. No idea how that turned out but there much rueing about not having enough rifle totting characters. 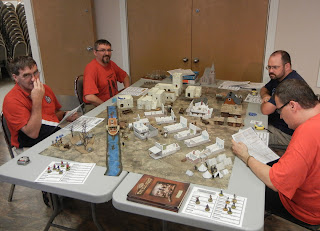 Kevin reprised an older MayDay game using some home-brewed WW2 rules. Panzer Lehr was striking back at some Americans in Normandy. Dave and I planned to run our vehicles off the far side of the board, using the road on the right while blocking on the left and perhaps occupying some town buildings for extra victory points. 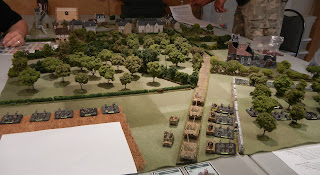 Things went well during the first half of the game, with both of the American flanks folding up and our troops clearing a path for the vehicle run. But then we failed three or four activations for our column in a row, thus blocking the road (plus failing multiple other activations)! Much swearing and making of lemon-aide ensued, as American reinforcements started to arrive. Fortunately, they were drawn into a fight with our infantry on the other side of the board. 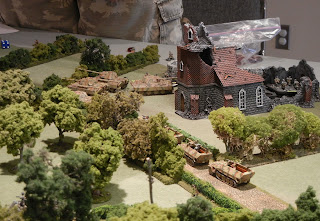 We eventually managed to get some asses in gear and rushed some half tracks off the end of the board for a modest (if unsatisfying) win. I think, with a few more turns, we could have cleaned things up nicely but a closely run game is pretty fun. As always, Kevin's terrain was amazing to fight over and Mark fought to the last die roll. 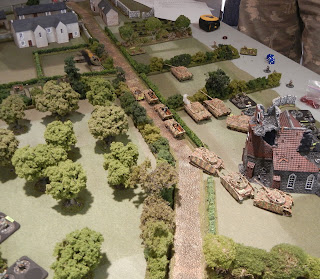 Thanks for playing, Bob. Hey...Coltman spit the dummy again...who would have guessed?!?

Bob, the game is 1989:The Dawn of Freedom. I, as the Democrat player, ended up winning shortly after everyone cleared out with a decisive power struggle win in East Germany.

Scott: Thanks and congratulations!

Kevin: Multiple command fails is frustrating (as I know from bitter experience!). Overall, though, a fun scenario. The tension around how many times (if any) your group will activate is the key to the game. Sometimes you get a bad batch of gas or the CO has the trots. Such is life!