I took on a small commission this summer (36 mounted 17th-century Polish cavalry) and have finished the first half of it. These 15mm figures are a set of Pancerni Cavalry with spears for the game Fire & Sword. 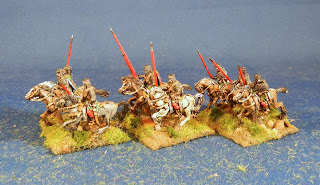 Overall, nice models. A bit thinner sculpting than other brands but I think they would fit in with most manufacturers. A fair bit of detail that I'm not sure I really did justice. 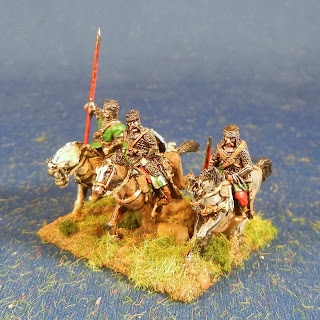 Mark asked me to paint these 18 figures as two distinct units: one in uniform colours (red spears) and one in a mix of colours suggesting a force cobbled together from various places. The units have lovely self-adhesive flags but I have left these off so Mark and his son could choose which they wanted with each unit. 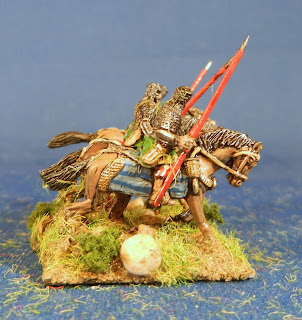 I think I learned a lot about these figures painting the first batch and I look forward to the Cossacks I have to do next. The manufacturer appears to be going the route of Battefront and others with fully contained units in each blister (or box, in this case). 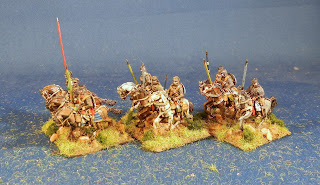 Up next: I have two games arranged for the next few days and I have some 28mm Arthurians underway. Then back to more 15mm Polish cavalry.
at 6:40 AM

Your 15's look like other painters' 25mm or 28mm. Very nicely done indeed.

I have the 28mm Old Glory Polish/Lithuanian cavalry for an army I have. I use Vlad the Impaler published by the once great Warhammer Historical people.

Bravo on your painting.

Thanks kindly Mal. I think these turned out okay. With a bit more sense of the figures, the next batch will be better.