I finished off a second unit of 15mm 17th-century cavalry for my friend Mark. These are some Cossacks he picked up while in Poland. 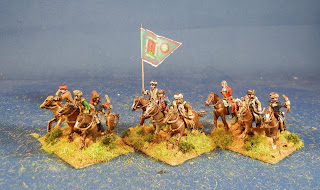 These castings were not as crisp as the first batch I did but they painted up just fine. There was quite a lot less detail to worry about. 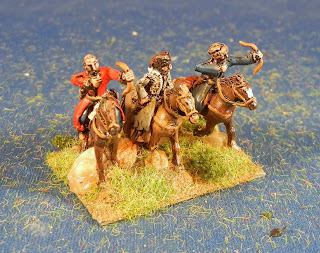 Mark claims several more boxes are sitting in customs awaiting release so I'll drop these by his house Saturday and see what turns up in the next month of so. 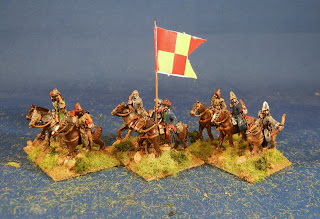 Up next: I have spent much f this week painting up a bunch of GW fences I got at last weekend's swap meet. Except for the endless skulls I keep running across (like some sort of freaking Pol Pot admirers club), they are lovely fences and will work for both dark ages and a run down modern cemetery. I have turned back to my Saxon warband for Songs of Arthur and Merlin and am blocking in colours. And then I'll start on the buildings. I'll also need to lay my hands on some model railway trees.