We had 11 guys out last night with four games running. Kevin hosted terry, Will and I on a new game: Spartacus. Basically a gladiator game, each player runs a house and tries to accrue influence and fame. 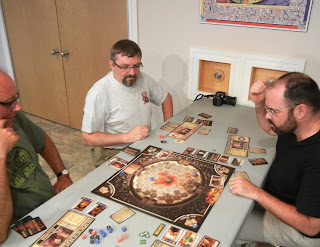 This was a hoot and we played two short games. Lots of interaction between the players, punctuated by a surprisingly engaging round of combat each turn. I would absolutely play this again--nice, clean mechanics and lots to think about. 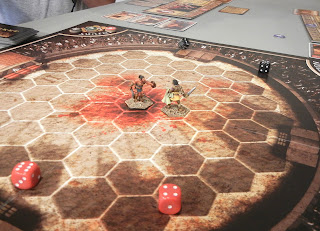 For some reason my picture of Dave and Mark playing Songs of Blades and Heroes did not turn out (weird lighting) but they seemed to have a good time. 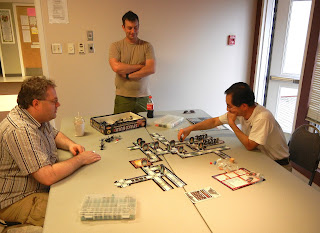 Stu hosted Chen and Scott in a game of Space Hulk that was still going on when I left. And Casper and Elliot were Warmachining. 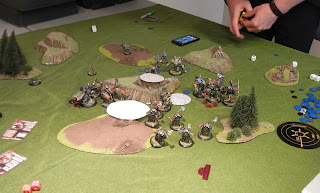 Up next: I'm basing some 15mm horsemen today. I'm also painting some 28mm fences and working on a Saxon warband. A few days of rain would really help out my painting productivity!
at 6:23 AM

Enjoyed playing Spartacus with you, Bob...let's play again in a few sessions.

Yes please, that was quite a lot of fun.