I've started the rebasing of my remaining 6mm troops--all of the AWI fellows. I started with the Grenadiers and decided I would keep with three ranks because I liked the looks of it. I see some of these fellows are sticking grass in their caps to camouflage themselves... .

These are, of course, Baccus figures. I retired my Adler grenadiers because they just couldn't cope with the handling the figures got in play. I need to get another base or two of these fellows from Peter once I figure out which strips I'm short. 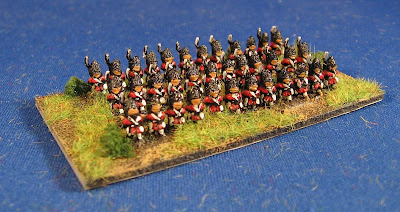 I also put together two bases of light infantry. The flag pole is bare because I need to make up or order some new, probably smaller, flags.

I did these fellows in ranks of two because (1) that worked out with the number of figures I had and (2) I thought the lights might be prone to fighting in a bit more open order. 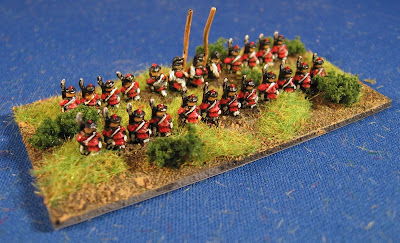 Again, the base needs some flags to finish it up. I'll do those when I get to the end and know how many flags I need.

Up next: Some more 15mm Saracens hit the workbench next week. And I'll continue with the rebasing.
at 2:00 PM

You have my sympathy - I've had to rebase a number of troops recently.

Like the troops though - I use baccus for my Napoleonics and I love 'em (especially my British Rocket Troops!).

I'm doing some British flags that can be used for 6mm on my Naps blog - but they're more for Napoleonics than AWI.

Are you going to post some pics when the flags are done?

Phil, thanks. Oh yes, will post. I will likely order some flags from Peter when I figure out the extra few strips I need to fill out a couple of units (changing of basing scheme created some remainder strips).