Some odds and ends: AWI and medieval

After a busy week at work (thus a slow week of gaming), I managed to finish off some stuff I have been working on. First up are 11 28mm shooters for my DBA/HoTT medieval army. I picked these guys up at the club auction.

These fellows are Old Glory figures and I experimented with a slightly more impressionistic approach to painting. I'd say it was not as effective as my usual approach so I won't do that again! That said, I now have three bases of shooters. 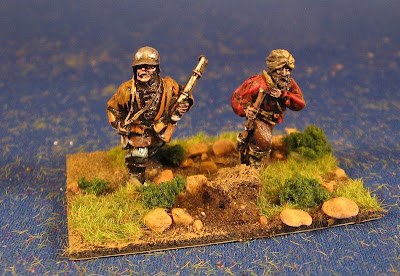 I also did one base of psiloi (good suggestion, Dave).

I then returned to a 15mm rebel army for the AWI. First up were three bases of dragoons. I'm not sure of the maker of these fellows (Essex?) as I got the whole army in trade.

Then I used some Age of Reason (Old Glory) continentals with broken bayonets as some militia. Not exactly as varied as militia likely were (I tried to mix up the paint colours to help them look more assorted) but there you go.

I also did three bases of light troops. I suspect these are Old Glory. And finally there are two bases of skirmishers. Between these guys and the earlier batch I did, I now have a pretty big DBHx army.

Up next: I have more odds and ends to work through. These include some 28mm lurkers and a magician for the medieval army (some LotR plastics I got at the club auction), and a few 28mm samurai that I want to experiment with to see if I have the painting mojo to tackle a bigger army. I'll be priming these this afternoon.

I also have some 28mm Normans ready to prime. These are the new plastic Normans from Conquest--I got three boxes of mounted and will finish the DBA army when some foot are released. I assembled three last night and they look pretty good. I thought the arms would look a bit strange (based on how the sprues look) but so far they look just fine).
at 9:09 AM

Is it me, or does the guy on the left on the Psiloi base look like Sgt. Rock, at least from a distance?

I TOTALLY thought the same thing when I first opened up the page!!

I thought maybe Bob was working on an "Easy Comapny" HOTT army... but wondered who the dude in the turban beside him was!!

Yes, he does have a bit of a grimace, doesn't he!