As I continue to finish stuff up, I knocked off a few plastic LotR figures this weekend to add to my 28mm DBA/HoTT armies. First up was a magician for either a medieval or dark age army. Obviously an old Gandalf figure that I picked up at the club auction a couple of weeks back.. 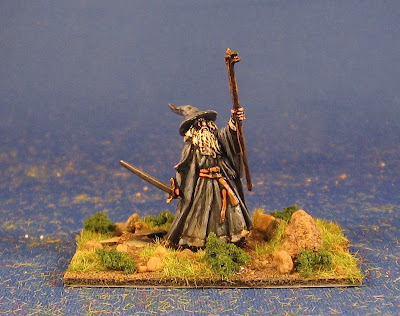 I also did a base of lurkers using some hobbits. Beware the deadly frying pan! 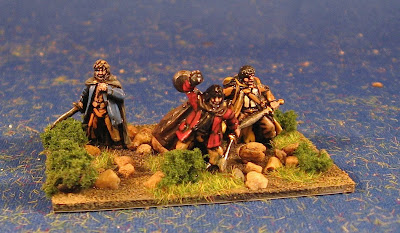 I then moved onto Conquest Games' new plastic Normans. I bought three boxes (36 figures) as part of a pre-order deal to make a DBA Norman/Frank army. The figures came off the sprue easily enough, although some weird curves resulted in a couple taking unchivalrous blows to their groins before I figured out a better cutting angle. Assembly was also straight forward with no gapping joins or fiddly parts. 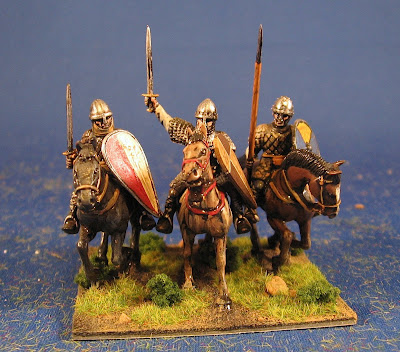 Painting also went pretty well using my usual techniques. I fiddled around with the shields some to try and get a nice effect--I'll try something more detailed with the next figures I do. The horses are particularly nice. There are also enough extra rider bodies you can select the degree of armour you want your fellows to have. The picture below shows both chain mail and padded armour. There are also a few guys in tunics or leather jerkins. 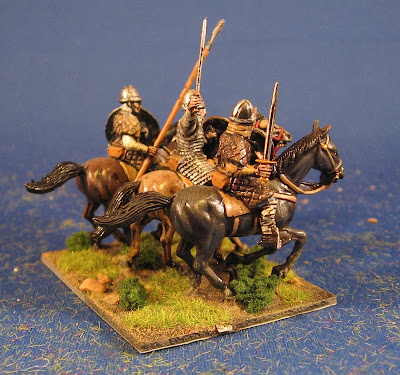 There are two horse poses (galloping and walking) in a 2:1 ratio and the heads are interchangeable so you can create quite a lot of variety. The horses' heads might be a bit elongated but that is picking nits. I assembled the rest of the box last night and it took about 45 minutes for nine figures. I was initially unsure about the arm pose of the centre figure (it looked unnatural on the sprue) but I'm happy with it. Overall, a good purchase. Now I need some plastic foot! 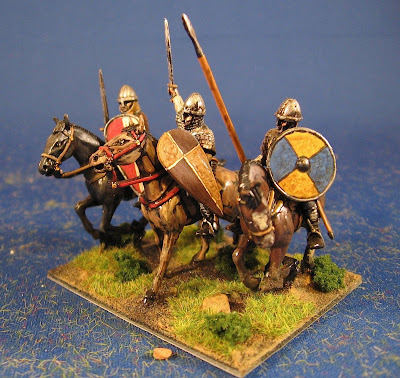 Up next: Tuesday is the EDBAG 1066 campaign where I am under the harsh lash of my new overlord. I also have a bunch of Normans to paint! And another commission should be arriving shortly.
at 3:20 PM

I was hoping to keep pace with your rate of output until the end of 2010, and I am on track to paint 2,000 figures this year, but I still can't catch up to you! How do you do it?

Do you perhaps have a house-elf who paints at night?

There is also probably more variation in type/era. WHFB take a long time compared most other 28s, Romans are easy compared to Barbies, Nappys over WW2, etc

Dave: Yeah, I was aiming for 2000 myself this year. In terms of painting, you know 30-minutes a day (on average) is what I do but I have three projects on the go at any one moment. This allow some to switch projects (if interest lags) and negates the impact of drying time. I have also been gaming a bit less so that sometimes frees up a night.

Scott: Yes, the 200 6mm guys I did probably do bump up the numbers. But they are offset by the 28mm guys which take more time. I was aiming for 2000 15mm guys and figuring the big guys cancelled out the small.

Despite the pace, a lot of this has been commission to the dent in personal paint pile has not been that huge. Just got another commission box in from my friend Dale so need to gear up a bit here. Now where did that house elf dis-apparat to... .

Yeah, the 28mm stuff does take a fair bit. I've gone pretty quickly on my Tomb Kings (except for these thrice damned chariots!). I do find that my interest tends to dissipate I as I get into a project. I've found that popping a few Impetus bases into my schedule every now and then has helped. Almost done my TK and then on to Daemons!

Oh, I hate the TK chariots. I have two more for my HoTT army and simply cannot bring myself to do them.