I spent the weekend finishing off painting my first box of Conquest Games 28mm Normans and assembling a second box. With some additional work, I think I have a much better handle on this set. Among the "discoveries" are that all of the horse halves fit together so there are four possible body types. Add on three heads and it becomes possible to have 12 unique horse poses. That is some good design! 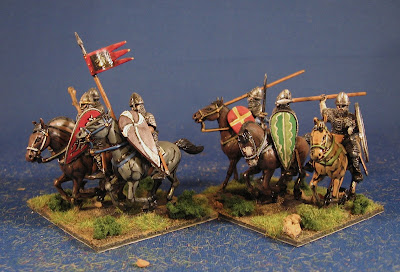 I made up two bases of 3Kn for my DBA army, including a general stand. I decided to make the rest of my Normans in mail. This allows me to reserve the extra fellows in padded armour or tunics from the other two sets (nine total, I think) and mate them with some additional sprues of horses to make mounted Vikings or Saxons. As I was thinking about doing some Wargames Factory and Gripping Beast Vikings over the Christmas break, this works out pretty well. 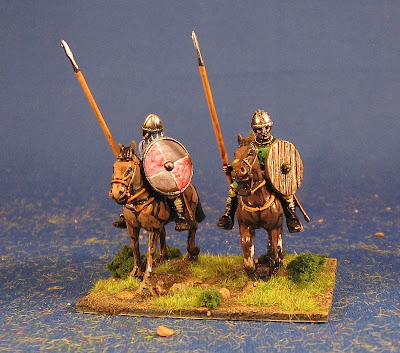 I also did up the single base of 2LH I needed for the Normans. Here I used the tunic-clad fellows from the first set and some round shields. With different heads, these could easily double as mounted Vikings or Saxons, I think.

I found putting together the second box to be quite a lot easier with all 12 assembled (at a leisurely pace) within an hour. I took my time to save the right parts for the Saxon/Viking cavalry as well as to get some diversity among the poses. I'm quite chuffed to see what a foot set from Conquest might look like. 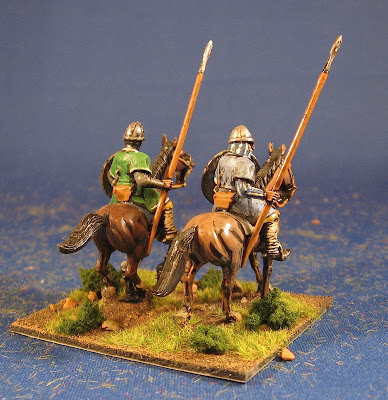 Below is one of three dead Normans I have (one per box). I did this one to see what it would look like. I presume this fellow died from a respiratory ailment caused by inhalation of static grass. I'm not sure of the value of these dead poses but I think I use this one as part of a Saxon camp. 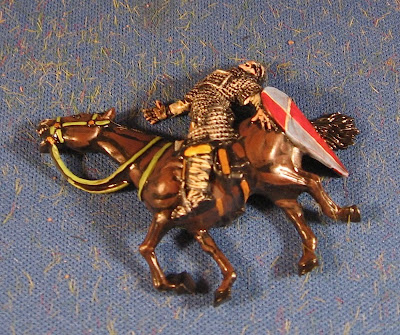 Below you can see the Conquest Games mounted Normans matched up against the HaT 28mm El Cid heavy Spanish infantry. I had hoped to use the HaT foot but clearly they don't work together so I'll wait on Conquest's foot box. The height is the same between the sets but the girth is different (compare the helmets) which means the HaT fellows will need to serve as Anglo Danes for the Normans to ride down (in my experience playing Anglo-Danes). 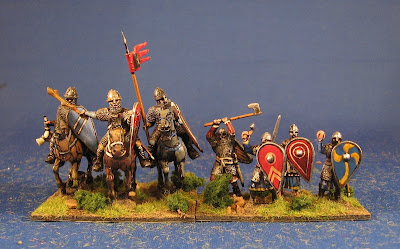 Up next: I'm half-way through painting a 15mm Macedonian DBA army and should have that done by next weekend. I will also get the 12 Normans I built together primer. And the club is this week.
at 3:03 PM

I wish all boxed sets came with at least 1 casualty. In DBA it may have no use (maybe for a camp?) but for Impetus this would be great for their unit bases, or it could be used as a casualty/disorder marker.

Those Conquest minis are pretty nice and look reasonably simple. The numerous horse pose options is excellent and adds much needed variance. Any idea how they compare with Foundry figs?

Scott: Nope, no idea how they compare to Foundry Normans except they are cheaper! Based on the Foundry stuff I have seen, I'd say the quality is similar except the undercuts issue with plastics means there are a few fudges. But the cost savings is pretty significant.

Looking good! I didn't realize Conquest was doing plastic now. I wanted to do a 1/72 plastic Norman DBA army to fight my recently finished vikings, but model choices are slim. I have the Revell box which ain't the best, so maybe I'll try getting into Strelets. I've been avoiding them because the proportions are so different compared to other manufacturers.

Wish these plastic Normans came out 2 years ago when I did my WAB army.

Andrew, I really like the Strelets Normans. I think they have a lot of character, and they paint up surprisingly well. If you are interested I can post a photo or two. I find the Revell Normans a bit skinny.

Andrew: Yes, Revell are a bit light on detail. Dave's Strelet's look like 20mm metals. I think Normans are something of a weird oversight by other manufacturers as they could also be early Crusaders.

Dave: Yeah, these are nice. Looking forward to seeing the matching foot.

I like the character of Strelets on their own. They look like they have 28mm proportions, if you know what I mean. I have hesitated to mix them with the more anatomically proportioned 1/72 guys.

So, I think I'll re-purpose my Revell Normans as elves (mixed with Caesar), and I might do an all Strelets Norman army.

Great paintjob Bob! When you put the Conquest Normans next to the HaT figures, the difference in proportion is really apparent. When I saw the picture I immediately thought "holy giant head Batman!"

Andrew, the Strelets Normans also have big horses. Next to, say, HaT's 1/72 El Cid cavalry, the difference really shows. (I found this out while doing HaT Parthians and Strelets Normans next to each other) It's not a problem if you put them in their own army though. The Strelets Norman foot (both the spearmen and the archers) are probably some of their best sets, and I'd recommend them. Although I hear their newest Anglo-Saxon sets are very nice too.

Great job! I quite like the casualty fig actually

Hi Bob
Love the job you have done on your troops. I'm just finishing off an Anglo Danish warband for Saga and am thinking about Normans as opponents. Do the Conquest figures fit together easily or do you need to do a lot of tidying up?