There were about 12 guys out last night at the club and three games ran. The largest was a Zulu game Dave ran with Black Powder. As one might expect, we have the thin red thin versus hordes of Zulus (which kept regenerating at the edge of the table). 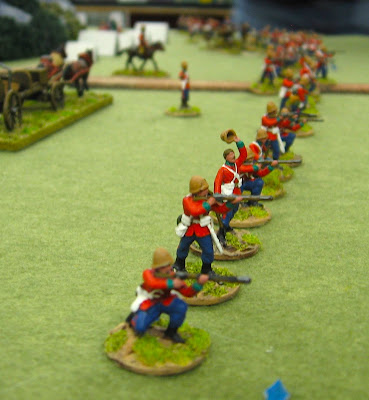 I'm not sure how this one ended but I recall hearing that Barry was the most victorious individual player. Perhaps this also suggests a Zulu victory? 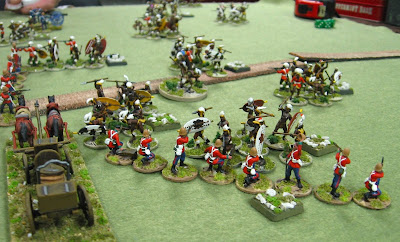 Justin put on a game of PT Boats using a card-driven game with weird, (and I thought) way cool mechanics. Basically, you have a hand of cards that allow you to do different things. You play out your hand as fast or slow as you like (with no reference to what anyone else is doing) and then you must make a morale test before drawing a new hand. If you fail the morale roll, your boat veers off in a random direction. This can be bad, as pictured above ("look out Justin!"). 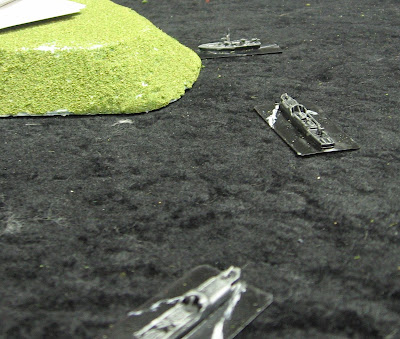 I'd like to try this again with a small pack of PT boats taking on a convoy of larger ships. This would let us do some torpedo runs! 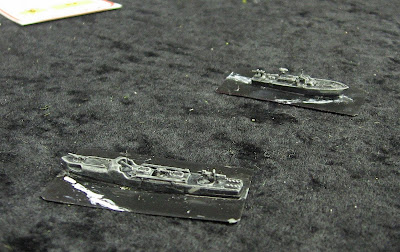 Mark also bested Chen and I playing a Kushite DBA army against the Norse Irish. Arrrgh! But a fun little game. The Norse-Irish move fast. 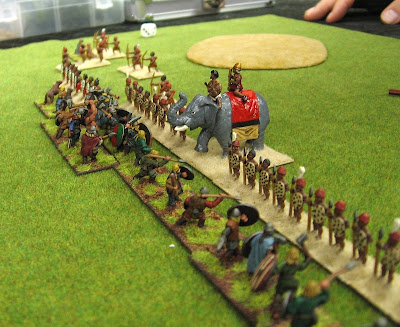 Up next: Work continues on the 15mm Macedonians (pike are done--now onto cavalry and others). I also have some 28mm Normans built and primered. Then back to some more 15mm guys--Trojans, I think.
at 9:15 AM

Looks like a lot of fun, Bob. The British need to be behind some walls to be most effective - out in the open they look easy meat for the Zulus.

DBA game looks good as well. Only played a couple of times but they're a cracking set of rules and mean you can get a couple of full games in an evening.

It was Isandlwana Phil, not such a good day and place to be British. No mealie bags to found, and backs against a mountain.

Are those ESCI-I used have 100s. The Vietnam war range was very well detailed.

Yep, the old Esci figs, both Zulus and Brits. They are not bad sculpt-wise, but there are a few silly poses and they tend to be a bit flat or 2-dimonsional. Their Nam figs were very good.