I braved a rain storm (in Edmonton in January?) and drove out to Bruce's place to try out Lions Rampant. Bruce had painted up a bunch of 15mm figures for the game: a mix of Essex mounted and Peter Pig foot.

The game was a hoot: very light, few rules, stark choices and enough randomness that it was fun. I had a knight-heavy army and watched with alternately delight and horror as they charged off after whatever was close. Jeeez! 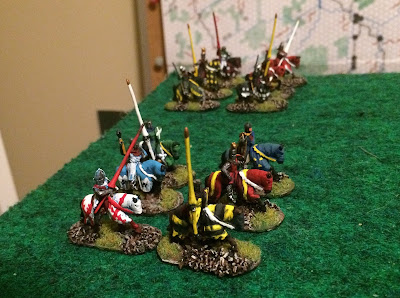 Very simply rules that you could explain and play with anyone. I wonder what the fantasy version is like (as I paint up my Battlelore dwarves)? 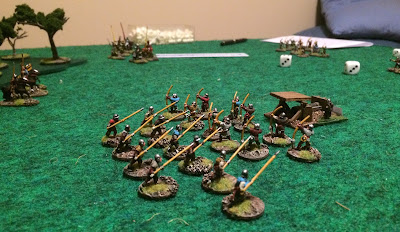 Up next: More 15mm Battlelore. First some foot then some Dwarven pikemen.
at 3:12 PM

Lovely looking figures. Just curious, when using 15mm figures do you switch the movement ranges from inches to centimetres?

We wee using inches. Using cm would affect the command radius aspect of the rules. Not sure it would be workable (maybe--never thought about it).

I've really enjoyed Lion Rampant and Dragon Rampant. They are pretty much identical - more or less the same troop types with different names - with a few fantastical special rules added in (nothing drastic). It reminds me very much of HOTT and DBA - their relation to each other that is.

Yes, just finished reading dragon rampant and agree. Looking forward to playing this but have to get some more units painted first!