We had a good crew out at the club on Tuesday night and I put on a game of For Honour and Glory. The scenario was North Point (September 14, 1814) as the British pressed on from burning Washington towards Baltimore.

They were opposed by a scratch force of American militia (who seriously sucked). Historically, the Americans withdrew under fire and bloodied the British enough to win the day. We played the scenario three times, eventually opting for the historical fighting withdrawal in order to deny the British a win under their time constraints. 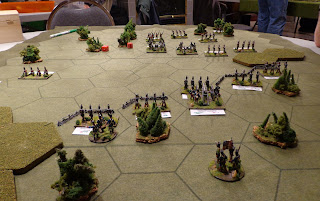 This historical approached worked pretty well and the Americans almost won by time and by casualties. Fortunately for the redcoats, a lucky roll gave them a clean sweep of the night. Good to have the 1812 guys out again. 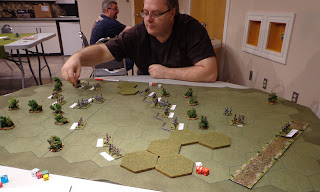 Up next: I have some more 15mm Flames of War figures on the go (objective markers) and picked up a few 1/72 figures while I was in Calgary this week at a conference.
at 3:06 PM

Thanks Phil; a few of the Imex ones have chipped a bit but a bit of paint and a good seal and we're back in business.

Thanks--will see about bringing them out to another game in the near future.