As part of my ongoing purge of troops, I have for sale a painted 28mm Celtic army. They come from a smoke- and pet-free home and all figures are based on 60mm frontages. I think the standout piece is this camp, where a druid seems to be vigorously rejecting the offer of a merchant while being mindful of his large friend. These are metal Warlord Games figures. 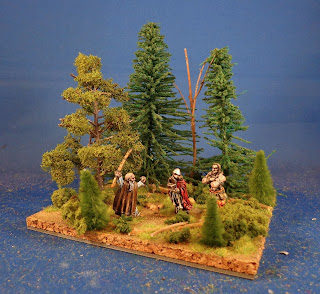 The bulk of the army are these warband. There are 12 three-man bases and one four-man command base. The shields are decalled for the most part and the figures are Wargames Factory. 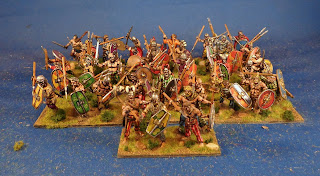 Sorry the depth of field is so wonky in the shot below but, if you ignore the blurry guy in the foreground,  I think it shows off the shields and detailing nicely. These are maybe my best painting. Lots of detail on the clothing and generally hairy-chested barbarity. 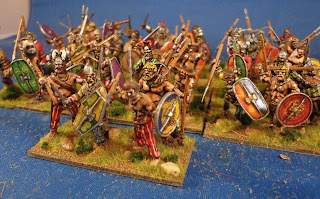 There are eight bases of skirmishers, with a mix of slings, bows and spears. I've used these troops for DBA/HoTT but they'd also do for WAB or Hail Caesar. The figures will also slip their bases with a short soak if you need them individually based.

There are four chariots with crew and riders. I've sculpted a few capes and generally garrished these guys up. There are two general options here--a guy with a standard and a lady with a spear. 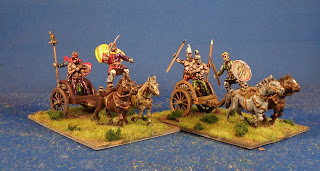 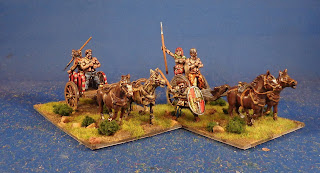 There are also four bases of characters. These include a hero chieftain, a base of three druids/witches, a naked druid with standing stone and a circular base for a leader--the fellow is holding a severed head (sorry the shot is hazy on the right).

Finally, there are two bases of medium cavalry and three bases of lighter cavalry. 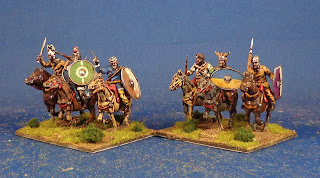 I'd like $300 OBO (which includes the cost of shipping in Canada or the US). Offers to bob.barnetson@shaw.ca. This is a nice army that I'm sad to part with. But a boys got to raise other armies somehow when the minister of finance clamps down on the spending!

Well done and I hope that they are taken up quickly.