Bruce brought a game of Maurice out to the club on Tuesday and Dennis I played Prussians against Bruce and Terry's Austrian-French alliance. We had hidden set-up so you can see we placed our cannons mid-board, facing some trees. The entire game was fought on the flanks, so that wasn't ideal placements! 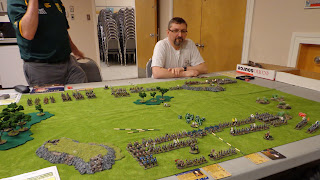 On the left, Bruce advanced irregulars into the forest and his cavalry was threatening my flank. We managed to gimmick-play his irregulars to a halt with cards but the cavalry was a real threat. Over on the right, Terry gimmicked Dennis into a mess and the surged cavalry and foot forward. 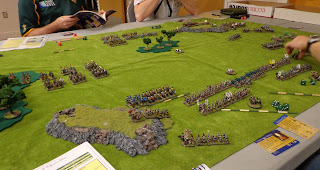 I met Bruce's cavalry with my own and gave better than I got. But time was starting to run short. 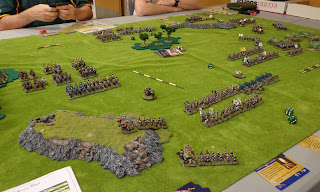 So I tried to pull his cavalry into my infantry while sending on unit off to grab the open objective mid-board (under the protection of our guns). In the meantime, Bruce got his irregulars going and started flanking my line. 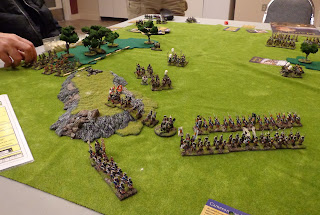 Dennis stoutly battled Terry but eventually his troops collapsed. I had my flank reasonably together and Bruce was also close to collapse but then night fell so we called it a tactical draw based on objectives held. A fun game. It always takes me awhile to recall the mechanics, but it is the right level of abstraction. 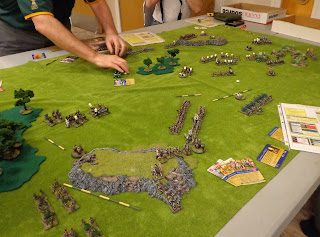 Up next: I'm painting a bunch of 15mm WW2 Germans--onto the gun metal and straps tonight. I'm also mulling rebasing my War of 1812 guys for Maurice. But only mulling at present.
at 1:54 PM

So what were your impressions? Maurice has pretty much taken the local club by storm, so I'm curious to see how it's being received elsewhere.

I've played 13 games or so and quite like it. A bit more detail than DBA but it feels like you are a general--initial deployment really matters, you have limited time and options, you need to balance the desire to act with the desire to stay organized (i.e., keep your card levels high).