I'm just finishing up a 15mm WW2 commission (some German Battle of the Bulge troops for Flames of War) and doing some final sealing of the snow bases. In the meantime, I have finished a plan and two tanks. 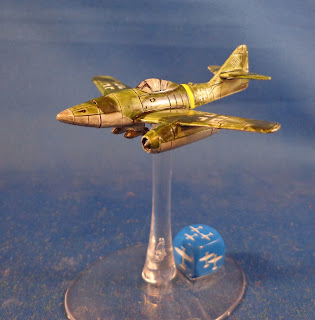 The plane is an Me-262 in a ground-attack role. My brother had one of these in 1/72 back the 1980s (completely useless for gaming purposes!) and I recall quite liking the lines of it. This one want together well enough with washes over a white primer to keep the panel lines visible. A nifty flight stand with magnets too. 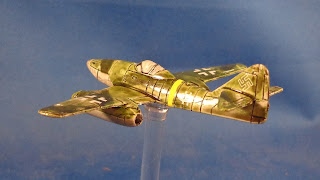 This army also includes two jadgpanthers. At the request of the owner, I added some snow. One fellow is peaking out of his hatch and could serve as a unit commander.

Up next: Some AA guns and commandos round out this unit. Then there is club night on Tuesday so I need to get together a War of 1812 game for that. Afterwards I don't know what is next--Some buildings maybe.
at 2:09 PM

Those are JagdTIGERS, not Panthers...

Yes, you are right (look at the hull). So even less probable!