I'm puttering away on a 15mm WW2 commission (Germans troops for the Bulge) and finished off an infantry company. These are Flames of War models and this infantry company has nice cuts out for the integral bases on the unit base. 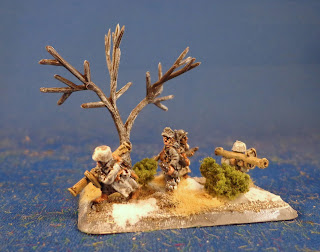 There were five bases of panzerschrecks. That is a lot of anti-armour power!

There were also two bases of MG/panzerfaust teams. I continued on with the winter basing scheme. I see one of the bases has a slight snow drift crack--I think I will got back and seal the drifts individually. 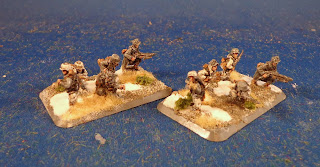 There were also ten bases of panzerfausts with assault rifles and panzerfausts with rifles--I split them up according to the box instructions but didn't bother to sort the bases for the photo below. As I said, a lot of anti-tank in this box!

I put trees on a couple of bases and did a short section of fence on one to mix it up a bit (visually). 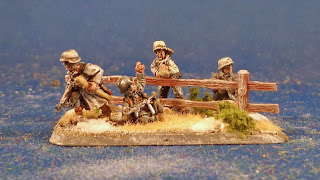 Finally, there were five bases of leaders.

All told, a nice unit and that puts me half-way through the commission. Up next are some AA guns, two jadgpanthers and an Me-262. I also have some superhero buildings half finished.
at 5:37 PM

I went back and hit each of the baking soda snowdrifts with a drop of future floor wax. This turned the baking soda translucent (which is a neat wet snow effect) so I topped it up with some extra baking soda (to make them snowy again) and that seems to have made the drifts more durable.

Thanks Phil; good figures really help things along! I'v never done snow bases before but liked my buddy Dave's stuff on his HoTT army so I tried to mimic it here.