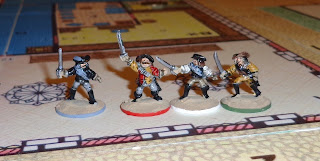 Bruce played the dastardly forces of Richelieu and I played the Musketeers and we were searching the two-story building for evidence of the queen's relations with the Duke of Somebodyorother. Hame 1 was a tie as we both worked out how to play and I could not, for the life of (as it turned out) open a locked door. Good lord! Lots of good defensive rolls, but no one any luck on the attack and generlaly we bumbled about. But we had a good time. 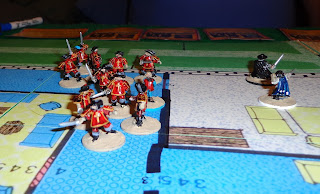 In game two I swapped a musketeer for some henchmen and Bruce swapped out something for the Cardinal himself and we both had better plans. Oh, and I managed to open a bloody door! This was a much better game, with Bruce playing the Cardinal for all he was worth, until the Cardinal ran out of special abilities and my gang of goons ran after him and sliced up his robe (although he eventually escaped).

We also had a good firefight followed by charge between bands of henchmen in the main hall. This was very dramatic in a movie-kind of way and was fun to fight. I managed to squeak out a win in the end through some good dice rolling. I'd certainly play this again. 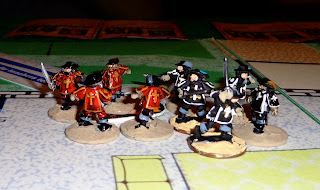 Up next: Still basing some 15mm cavalry and working on a house. Then I need to build some more 15mm horse and look at whatever else needs attention in my diminishing stock of figures.
at 6:57 AM

Thanks Adam; yeah it was fun. I find a lot of skirmish games are kind of same-ish (everyone run to the centre of the table and fight) but this one wasn't like that. A mix of scenario design and interesting mechanics.