I popped by Bruce's last night for a second game of GMT's Wilderness War. This game examines the French-Indian War. We played a few more rules correctly and played a five-year game instead of the three-year game we started with. 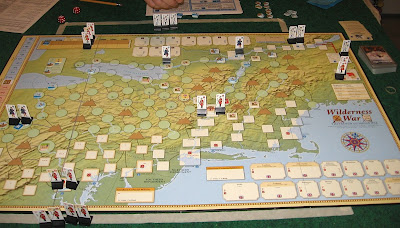 The game board is nicely done and certainly improves my 18th century geography! This was the set-up for the game. 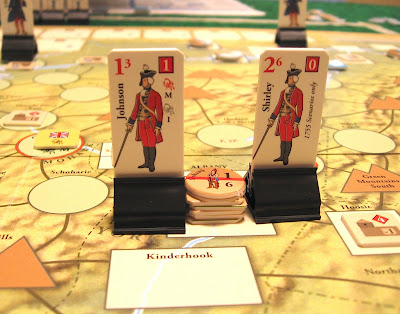 Here at the end of Lake Champlain sit my best generals. Shirley died early on due to card play (ack!) but Johnson went on to lead the drive on Montreal and Quebec in the last turns. 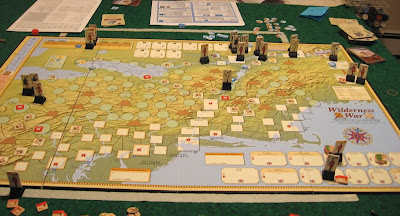 This is near the end of the game and the mess of generals at the top reflects my drive down the St. Lawrence. You can see (below) Bruce's efforts to come down lake Champlain and he eventually sacked Boston, alas too late to stop the steam roller. 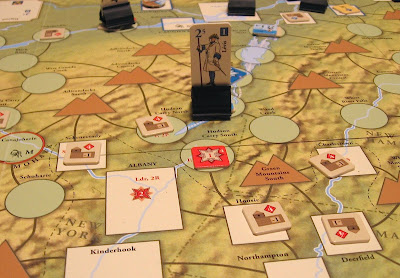 This is a hard game for the French to win. I don't know what they should do and I felt bad for Bruce as his dice also stunk last night (he was such a good sport about this!). I liked this game more than Hannibal and about the same as Washington's War. All told, we played 10 hands of cards in 2.5 hours.

Up next: 15mm AWI light horse will get based today and I will move some 15mm over the mountain men to the prep stage. I'm also got to build some medieval and ancient artillery this evening.
at 9:18 AM

Looks fun! I've been eyeing up the game for some time thinking I should give it a try. The sticking point is I HATE reading rules... I like the idea of playing grand strategy games to supplement the tactical tabletop games. I often wonder if some boardgames could be used as a campaign/scenario generator for tabletop battles.

Battlegames 21 has table-top conversion for three AWI board games so you can use minis (DBHx) to resolve the battles: