I swung by Bruce's for a game last night and he hauled out his 15mm ECW troops for some DBHx. We managed to get in three games before I was too tired to play any more. 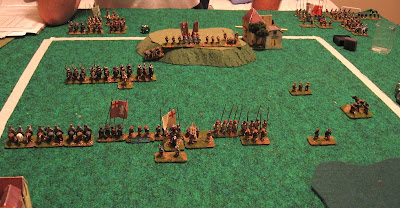 Game one saw both of us throw out hooks on our left flank, with my knights coming to grips with his cavalry and pistoleers. 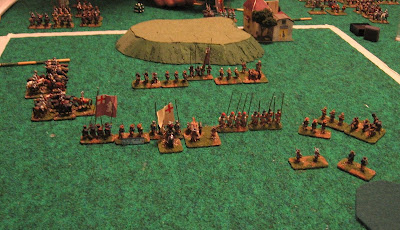 A lucky cannon shot and a victory with the cavalry put the game away for me. I did have pretty good dice, though. 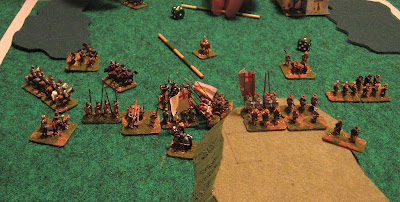 Game two was a rematch and I tried something new (and stupid) with my cavalry. Fortunately, I managed to pick Bruce's forces apart with my main line while I got the horse sorted out. 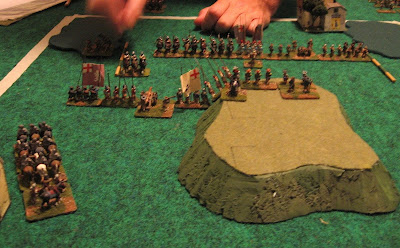 Again, good dice and a bad play for Bruce (recoiling onto his own unit sideways) put this one in the bag. I was pretty cocky going into game three, especially after he beat me 3-0 last week.. 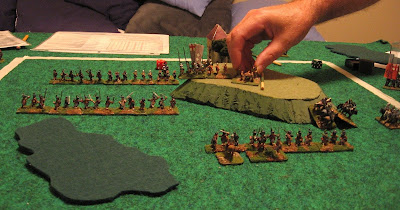 We switched armies and I took a Scottish army with lots of warband. I rushed them forward on the left hoping to quick-kill his blade and shot units. Meantime, Bruce ran his cavalry forward on my right. Oddly, I won the cavalry battle on the right, snagging three units in the process. Then Bruce just handed my warband their ass and won with four straight kills. Live and learn, I guess. Well, not so much for the warband.

Up next: Some 15mm Late Romans are just coming off the painting table and I am making progress on some DBA terrain. Then some 28mm Imperial Romans and likely then onto some 15mm painting commissions.
at 4:15 PM