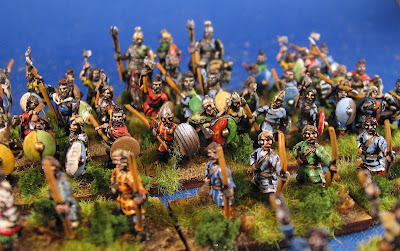 This is a bit of a hordeish army with lots of warband. Despite the age of Essex's sculpts, you can get a fairly good result with them (click on the picture to zoom)!

There are eight 4Wb bases, including the optional foot general (far left, more heavily armoured). With no real painting instructions, I decided to make these fellows more of an early Alamanni army with bright Germanic clothing. Some of the others I've seen on line tend towards more "dark age drab".

There are also three units of 3Bw. A bit more pose variety would be nice but dang can I ever production line mono-pose armies! 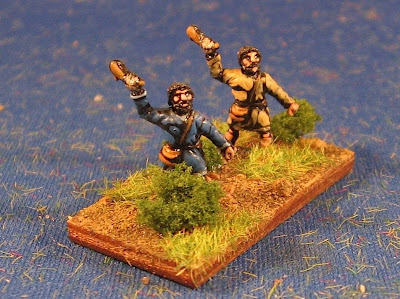 There is also one 2Ps element. 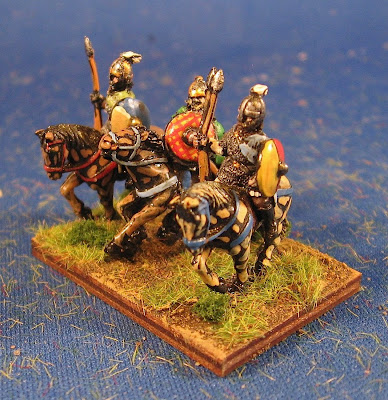 Finally, there is a 3Cv general element. I think the general figure is one of Essex's weaker poses but he looks alright. I couldn't see a way to get a standard on this base without major surgery on one of the riders. I thought about it but there is just too much stuff piled up.

Up next: Some 15mm AWI are being prepped as is a 15mm Xyston army. I have a small number of 28mm medieval and ancient figures about to get dipped and based. And I'm hoping I can play another game of Wilderness War this weekend. And my daughter brought home a Lego set where your build Hogwarts and then it functions as a game. Not bad despite some ESL rules.
at 12:04 PM

[whistles] Don is going to be happy with that...

That is the army he won for winning our local DBA tournament, more than six months ago. It will finally be painted!

Now, to find an opponent army for it...