I picked up a bit of painting work for a friend in Ontario and, with my ear infection on the retreat, I've just churned out the first units.

These are 15mm Turcoman archers for his Saracen army. The figures are made by Legio-Heroica in France and are quite lovely. 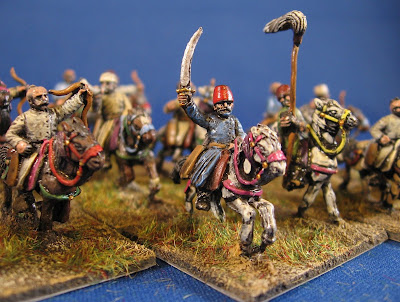 These were two-part figures (riders and horse). Virtually no flash and nice fit. Some of the other figures require gluing on shields and spears which was less fiddly than I thought it would be. 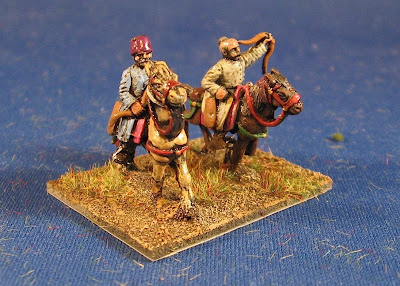 I think they took the paint quite nicely. The various sources i used showed them to be a mix of bright colours (especially the tack) and drab colours (homespun linen and wool?). I tried for a drabber, more middle eastern base than usual. They are based on standard DBA bases, although David intends to use them for Shattered Lances. 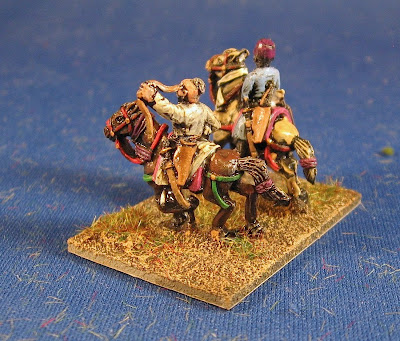 Next up: Some armoured Guhlam mounted archers. And I need to start rebasing 6mm AWI figures for MayDay.
at 11:30 AM

I've been toying with the idea of picking up a DBA Mongol Army... I think it's 1 Cavalry and 11 Light horse...

I'm getting excited about mobile armies these days. I can field an entirely mounted Orc/Goblin Army for HOTT and it's pretty cool. Hero for a heavy hitter, loads of Riders and a couple of beasts to deal with bad-going - slowest thing in the army; The beasts @400paces/turn (through any sort of terrain!)

Played Mongols vs Chinese and they were great - very frustrating to play against, I'm sure.

Thinking of building a Parthian army for the same reason. Cataphracts, mobile skirmish cavalry and not much else!

Thanks guys. Looks like one guy's beard got touched with some blue (invisible at 1:1 but at 4x magnification all sorts of stuff shows up)! Must fix that. These are very nice miniatures.

I have a Parthian army and have had a heck of a time learning how to use it. Yet one time I beat a Roman in 7 minutes in DBA. So I guess it is possible to win!

They certainly beat the Romans in 'real' life. Wasted the equites then rode round pinging arrows into the legions - then got supplied with more arrows to finish the job. The Romans, tired, thirsty and demoralised, eventually broke and got ridden down.

As my (more experienced) playing partner explained, when using a mobile cavalry army you need patience. Pull the opposition out of position (as they have to move to address the threat to flank or rear) - take on his cavalry far from his other troops (i.e. feint a withdraw then hit them when a safe distance away so his 'foot' can't intervene).

Once the opponents cavalry is gone, you can act with impunity - ride round the back, shoot arrows, ride away. Eventually they will break formation, lose cohesion and thus are ripe for the kill.

Or so the theory goes.

I like the colorful tack - it really stands out. What do you use for a wash on your figures?

Future floor wax with a bit of black and brown paint mixed in. I also use Future with black paint (50/50?) as the primer. Seals, reinforces joins and puts in a nice coat of shadow to paint around. Add on the wash with future and the figures are indestructable and the shadow gets reinforced.

Great looking figures, Bob; I may have to get some instead of the Outpost ones that I have and don't like! I'm interested in the use of the floor polish as a primer--a gloss primer would give a different surface to paint onto.

Yeah the slippery primer makes painting easier. Putting a layer of shadow on right away also means you have to paint less of the surface area. And dark spots (like brown horse's mane) gets both coloured and naturally coloured and highlighted by the primer so you can skip it all together.

Thanks. Do you use any other primer before the floor polish? Or just straight onto the bare lead? I tried your brown-black wash yesterday and was very pleased with the result. I'd found neither black nor brown fully satisfactory.