Two weeks ago Mark hooked me up with a box of three 28mm plastic Wargames Factory Celtic Chariots. These are for my Ancient British DBA army. I managed to knock them off pretty quickly

The fellow with the yellow cape turned out to be glued at a fairly improbable angle so I think I might go back and shift his weight forward a bit. Or put an arrow in his chest. We'll see. Despite this, I was fairly happy with the capes. I wonder if a flag waving off the standards would help this model? 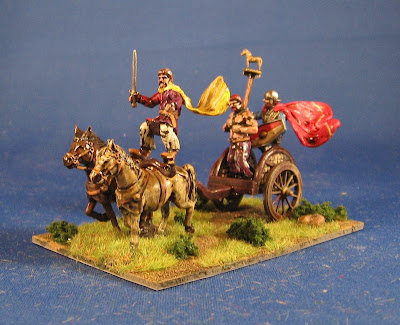 The set comes with a Boudicca figure dressed up as a 9th-level AD&D trollop. Nice to see a female figure but I would have preferred one a bit more practically dressed. Some putty could rectify this and I may go do that with another figure and carve this one out. I might then give her a pennant on her spear and maybe some colourful rags on the tips of the yoke. 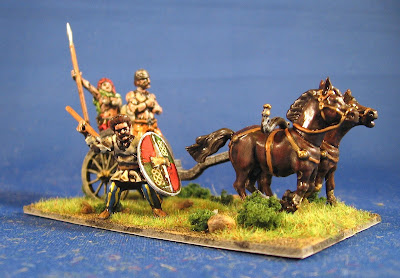 I tried to add a dare-devil rider here. 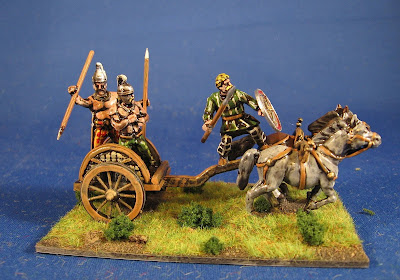 And, finally all three chariots coming head on.

Up next: It is club night on Tuesday with the annual auction as well so likely a post-game report from that. On the painting table are some beautiful 15mm Legio-Heroica Saracens I'm painting for a friend. I just completed assembly and priming and faced only a couple of swear-worthy moments (which is remarkable). This is a fairly big project. so will occupy probably the next month worth of modeling.
at 2:16 PM

Add a rope for the chap in the yellow cape to hold on to and he'll look comfortable enough. These chariots are very well done. I like the action in them. They look like they're charging at full speed!

Good idea with the rope! Thanks!

Woof! I like them. Just bought some 10mm Gallic chariots and was looking for some inspiration re: colour schemes etc. These are ideal. Great stuff.