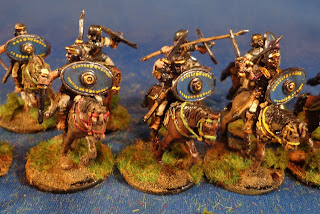 Up next: Some terrain building will happen this weekend. And I'm working on a box of auxilia to round out the basics of the army. Pretty nice that you can get a full Roman army from four boxes of Strelets.
at 6:00 PM

Your army is coming along nicely and it´s tempting me to get my Roman army restarted.

Thanks Paul; yes need to get this ready to roll for when GMT re-releases the CCA Imperial Roman box. Fortunately, they have pushed that back a month or two. Many more Romans to go then onto the hairy guys.