Bruce had me over for a game of Maurice Tuesday night. This is fast becoming my favourite horse and musket game. Below you can see the terrain as we mustered troops. Bruce was defending on the far side and the objective was just behind the top-most bridge. 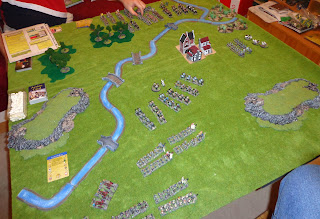 I decided to overload the right side of the board, seize the town and then get into a gun battle (as I had some sort of advantage of lethal fire). So my troops streamed off the hill, across the flats and into position. Bruce countered quickly. 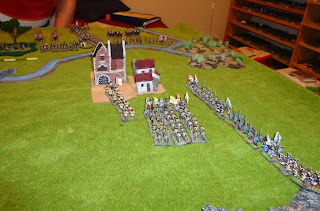 This led to a grinding stalemate where my shooting advantaged dueled with his morale advantage. We spent about 60% of the game grinding here. 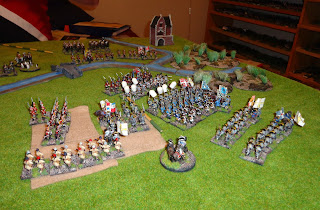 Eventually, I knew I had to get the cavalry moving. I had planned to loop around his flank but ran short on time so sent them across the river into the mouth of his guns. In retrospect, I should have just put my infantry here and push across the table where there was more room to maneuver but I seem to have an unfounded fear of cannon. 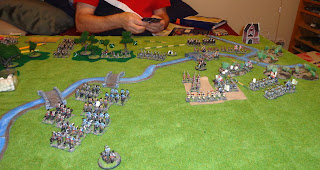 The cavalry made it across the river (with a formation change ion the fly that actually worked out for once) and then I ate his guns for breakfast. Then I charged against his now flanked infantry. I was running low on time but things were starting to look up. 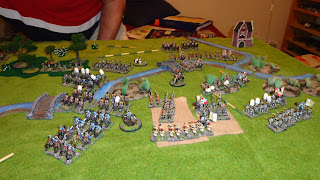 Alas, I could not break Bruce and he eventually managed to bag a horse unit that broke me. Interesting distribution of luck. I could not miss with shooting during the first part of the game but every unit he bagged lead to a huge loss of army morale as my high rolls carried across to morale rolls. 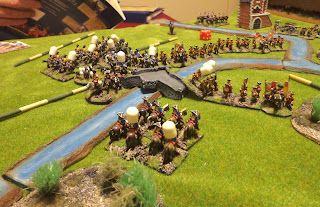 Up next: Some 15mm WW2 Americans are underway. I do have some HO-scale houses that are done. Then back to some more 1/72 ancients.
at 7:13 AM

Maurice is a great Game!

Yes, a fun night out. Dramatic. Still learning how to run an army in these rules. I keep leaving behind a big portion of my army which suggests my set-up needs work.