To fill out a 15mm WW2 FoW army I painted a few weeks back (German, Battle of the Bulge), the owner asked for a couple of objective markers.  The first was an ambulance with some wounded. 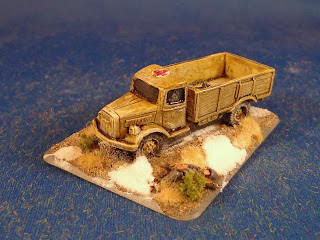 Overall, a reasonably effort, I think. Nice enough paint job and the basing matches the rest. 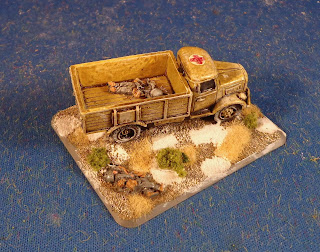 The second objective marker was supposed to be a truck that had gone through some ice. This posed all manner of challenges, given the relatively thin base and my lack of experience modelling items that (theoretically) extended below the surface. 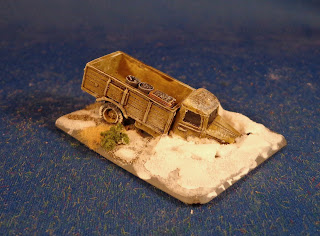 In the end, I snapped off the integral base and sawed the front end of the truck at an angle. Then I painted it and ruminated about how to pull this off. Drawing on my experience of burying my buddy Demetrios' 1982 Camero Rally Sport in a snow-filled ditch one time (we had to exit Dukes of Hazard style--I recall him being very calm, given the situation), I then cut up some card to represent ice blocks, slapped one some snow and sand and started painting and sealing and painting and sealing. 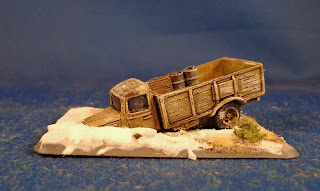 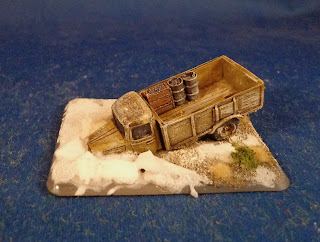 Up next: I based a bunch of 1/72 Imperial Romans on washers for CCA. My first box of Strelets and I quite enjoyed them. I have some light troops ready to paint. And we have the club coming Tuesday.
at 6:16 PM