We had seven guys out at the club last night and two games ran. Dave hosted Scott and Chen in a game of War and Conquest in 28mm.

I believe the game ended in a draw and the fellow son the road managed to get some of their troops off the table while the other fellow bagged a unit. Looked pretty! 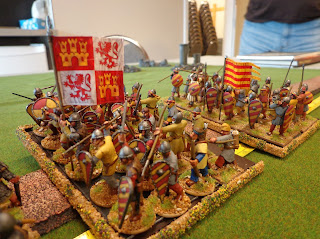 Kevin hosted Gord, Bruce and me in a game of Spartacus. It was generally a dastardly affair with backstabbing and hosing in abundance. So naturally I won in the end. Actually there was a lot of dumb luck involved in my victory (as usual) but the ending was dramatic so that makes for a good evening. 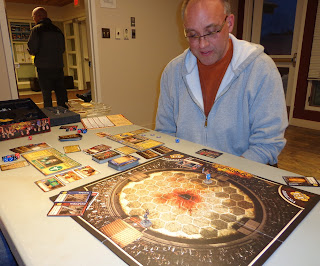 This week I will be sorting out the MayDay auction. I went home with two big boxes of donations and I'm off tonight to pick up another two boxes to the Smaug-like pile in the basement. This may be the best EWG auction ever in terms of volume and quality. I also have a couple of hundred 15mm WW2 airborne troops to pry off paint sticks and sort into groups for basing. THen likely a few more 15mm WW2 (mortars, bazookas and ATGs).
at 3:02 PM