I painted up my first box of Strelets' 1/72-scale Imperial Romans recently. Quite interest figures with lots of depth to the sculpts (more like metal). They were a bit of a bear to remove from the sprue, clean and assemble--more than an hour for 48 and some of the poses mean the separate shield is vulnerable to getting knocked loose.

East enough to paint (I see some errors here in the blow ups!) and I think a nice effect for a basic, drybrush, block and dip). I've mounted these on washers for CCA magnetic bases. I also see I'm also, out of flock and wondering who carries it locally besides the accursed GW stores? 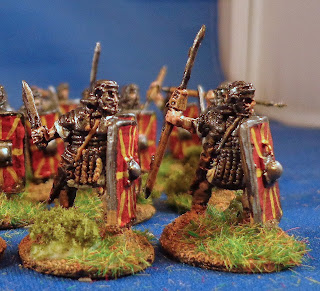 Up next: Club night tomorrow then onto some buildings and some more 1/72 light troops (Strelets misnamed Velites box).
at 6:12 PM

Re. flock, my experience is to buy it from model railway shops rather than wargames shops, wherever possible. Why? Simply because it tends to be cheaper from the former. Wargames retailers always seem to up the prices on that sort of thing ;-)

I'm looking specifically for static grass (rather than the flat sawdust stuff). I did end up finding some at at a railway store for pretty much the same price at GW.