We had 10 guys out at the club on Tuesday. Dave put on a game of War and Conquest (no idea how it went), and there was a Battle of Westerosse smackdown that was still going on as I left. 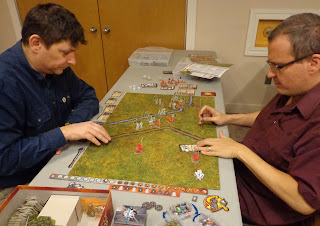 Bruce put on a game of Junta for Kevin, Gord and I. An interesting mix of card game and mini-table-top battle during coups. As it happens, I won (mostly because of something important that happened in the first round when none of us know what we were doing--but I will take it) and it was a fun game, I think. 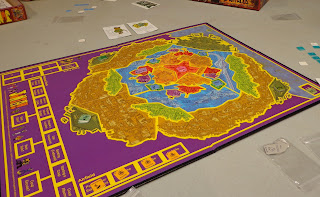 Up next: I have three HO-scale superhero buildings completed and I'm working on some 1/72 Roman light troops for CCA. I also ran across a bunch more 28mm ancients that I need to get rid of--I may have time this weekend to put them up here.
at 1:16 PM