We had 10 guys out at the club last night, with three games running. Dave, Andy and Chen began with a card game and then moved onto playing Command and Color Napoleonics. 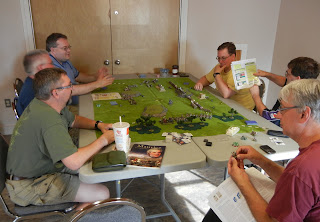 Bruce hosted Scott, Chris, Terry and Mark in a game of Maurice. This game was set on the subcontinent and saw the British withstand multiple attacks by the locals. 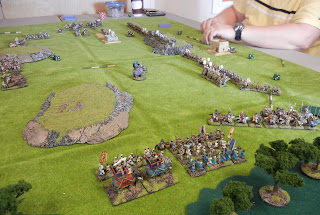 Stu and played a couple of games of HoTT. He brought out a freshly painted easterling LotR army and I pulled out some Star Wars Imperials. 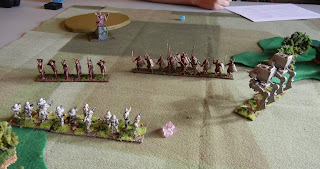 Game one went to Stu. I had things well in hand, then ensorcelled my general, then rolled seven ones for pips in eight turns. Stu just picked me apart at his leisure. 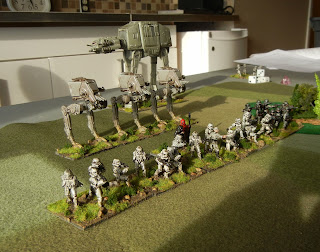 Game two saw me put down a river and then rush to get across it. I suppose I could have defended the bank but that would have been pretty boring. The resulting furball eventually went my way, but there was a fair bit of luck involved at the end!

My imperial army needs a few more units that can hit hard. Maybe a couple of blades or a hero in lieu of one of the riders and two of the shooters? I must finish my camp as well.

Up next: I have some more LotR drying and I have started on some 15mm Polish cavalry.
at 6:56 AM

The Maurice guys seemed to have a good time. Good thing Dave Sr and Andy brought games as the games were full up by the time they arrived. I had a nice time with HoTT and a good chance to test my army for the EDBAG campaign.