Finishing up the CCA scenarios

Bruce dropped by last night for a game and I pulled out CCA (too hot to be creative) and found the last two scenarios in the base game that (for some reason), I've never played before. First up was Ticinius River (218BC(). 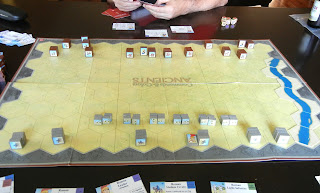 The game pits an all-cavalry (light and heavy) Carthaginian army against a mixed Roman army (medium horse and light infantry). Historically, the Romans got thrashed. Bruce managed a repeat but it was closer than I thought it was going to be. 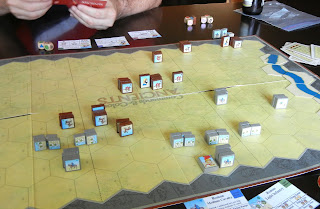 We then played Castulo (211 BC) where again the Carthaginians thrashed the Romans historically. In game one, Bruce really put a beating on me. It was close until the end when my heavy legion marched up and got destroyed in a single turn. A very frustrating way to lose! 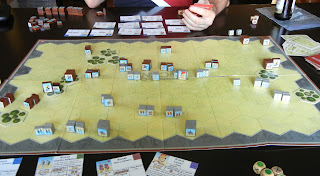 Game two was a (rare) Roman win (!), again with the heavy legion being the decisive factor. This time, my dice were incredibly hot, taking two units one single rolls. Tough to come back from that.

Although CCA is not the best game ever created, it is easy to set-up and play, moves quickly and can be fun. Must now look at the second expansion and see what needs to be played there. Perhaps Bruce will bring out CCN one day when I'm at his house. 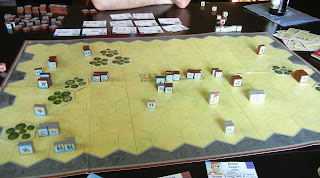 Up next: I am almost done the last 10mm AWI. An army injury nixed painting this weekend but I just have the gun metal, washing and basing to do. We'll see how my arm is tonight. THen onto some 28mm LotRs.
at 6:36 AM