A weekend of cooler weather gave me time to finish off some 28mm Lord of the Rings figures for a HoTT army I've been putting together. These are figures I picked up at the MayDay auction.

There were enough elves to do four bases of shooters. I can't say I find the plastic GW elves to be any great shakes, but with some effort, they turn out to be quite workable in big groups. 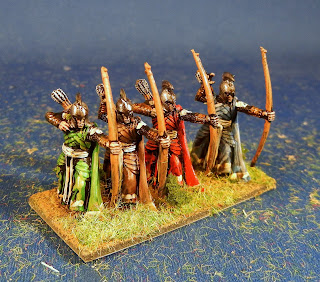 They'll nicely complement the blades that I put together a few weeks back. 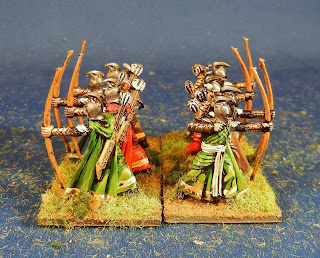 I also did a hero base, with Legolas and a hobbit. 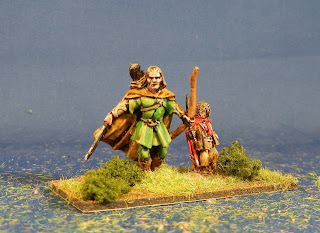 Up next: I have a couple of bases of hobbits drying as well as a camp and a dragon. Underway are a couple of mounted bases, which will round out the army. I also have some 15mm Polish cavalry built and primed.
at 7:12 AM

I really like the paintscheme you have chosen. A lot better than the jackson point of view.
Great job !
Benoit

Thanks guys. Trying to mix up the colours to get past the mono-pose issue of the GW plastics. Just finished painting the mounted so will wash and base them and have the whole army finished by the weekend. Yay, getting something off my workbench!